Radar update is live, and so is a new update in play/app store as well!!

Thanks for the heads up

Again, only on ffing f-book

Hey DuneCrawler. Not sure what you meant re: Facebook. I dont use facebook and can get in at the address suggested. Looks pretty good

Oh, don’t worry, It’s just that we, the forum users, feel “a bit” disapointed because the people on facebook (which I hardly use and only have bacause of my work) get the updates and previews about the game before we do on the forum.

I personally think that there are more quallity users here on the forum than on facebook.

Just an idea: Is there any chance to add the plane registration to the radar in any future update?

Because for PRG I can see several arrivals from my planes but most of them are flying from my NGO to @UniqueHangman58 's PRG. So the radar is correct because they are arriving at PRG but actually they are not arriving at my PRG. It would be a really nice upgrade to see the registration in the radar as well. 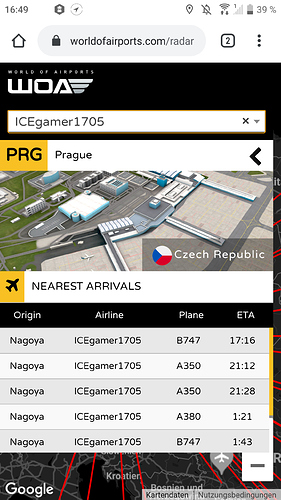 are the new airports that popped up in radar like ANC, OVB etc. a hint that we will get player cargo operations soon?

I think its very likely, maybe not in this update but the one after this one. But anyway we are due an update soon. 18 days have passed since the last one

I have a problem I go to the radar I write my plaine he cant find it all so maybe you can had the radar to the game or make a app it will be more easy to use?

I am using Apple store and I have not seen the update yet.

@sladebuck You must have misunderstood, no one said that the game got an update. I just mentioned that one is probably coming soon based on the devs regular release schedule and also a few teasers

Not all planes are showing up on the radar