So I asked earlier but confirmed my assessment… is there an order to flights arriving?

This is from SAN DIEGO, but happens at all the airports…

What am I missing? 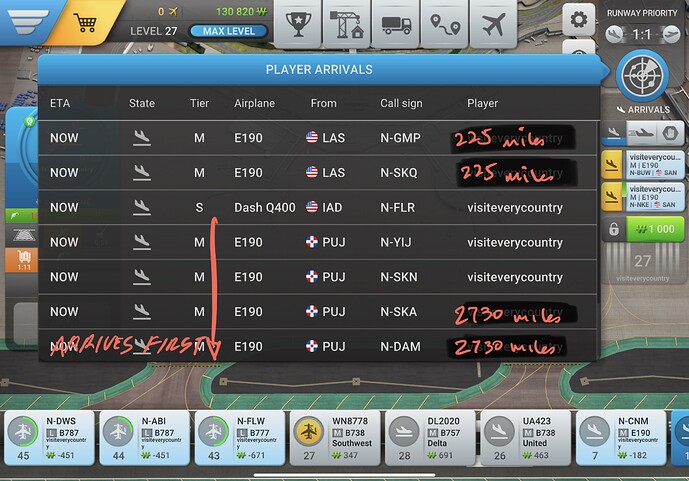 Yes, I got that part (Others, then mine from bottom to top).

My question is the sort order for my planes does not make sense (seems to be reversed).

It waits for your connection partner to handle it or waits for 4 hours.

That’s what I would expect also but there seems to be an own algorithm in WoA after a restart of the game. E.g. at IAD of my own airplanes first the L/XL come in creating all filled up stands there while the M- and S-stands are empty, after that a few M-planes come in followed by all my 5 BAE142 freighters at once and than a bunch of S-planes come in. After that a mixture of S & M come in.

It would be really cool if planes get timestamps for their arrival so that after a restart the cue is the way at what they would have arrived originally.

How do you handle all these?

How do you quote like that? Sorry I’m relatively new to the forums

Select the part of a sentence. There will be a option named quote, press on that, and don’t delete any word which were already written and write what you what to write.

@RudiMentaer75 Yes, I get the same. My L/X flights all seem to be grouped as well (sometimes ahead and sometimes behind M). I can send a 787 from IAD to SAN or NGO and they arrive back at the same time.

This is problematic when I want to send a plane on a specific route that is already being flown, so I just throw it on a short hop such that when it returns, I can put it on the long route. Sucks when the reverse happens.

This may be a minor complaint, but as players learn and develop strategies, it becomes an increasingly part of their management effort.

P.S… LOVE your fleet. I just picked up two Concordes, so working on growing diverse fleets at each hub.

P.P.S… one day, it would be awesome to call this “World of Airlines” such that we can move aircraft between hubs depending on seasonal need and opportunity.

How do you handle all these?

I haven’t noticed any grouping on my fleet but I thought the newest arrival always arrives first. The oldest arrival arrives last. It doesn’t make sense and actually needs to be the other way around but that is what I noticed.

It is annoying because after the night it means my Concordes are always the last to land even though they arrived back at the airport first.

It does, I hardly see any planes with generic liveries