When buying my own new planes, i noticed that their registrations are completely random. This is quite unrealistick as IRL plane reg. usually have a “naming scheme” and alphabetical order. What im suggesting is that for example if my first BAe is registered I-YNZ, that would in the future be I-YNA, then for the next ones YNB, YNC, YND etc… you get the point. That also goes for different aircraft types. For A320s for example: no more I-MCC but MCA, MCB, MCC, MCD etc. Also this should be an optional thing i think, because some people probably like the random reg. more
Picture below for anyone who didnt quite understand my drawn out post 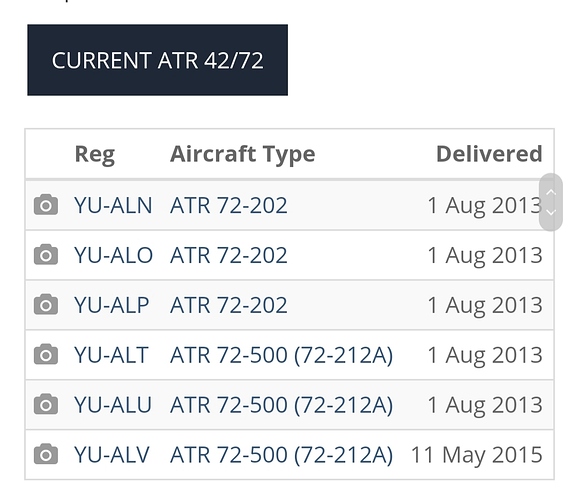 Edit: bonus points if you can guess which airlines fleets i screenshotted.
Hint: one of the planes in the pictures is actually in game

I agree with this feature and as for the airlines I think the top one is Cityjet with the bottom being AirSerbia.

The website the guy got the info from is planespotters.net (I didn’t Google it btw)

You got ASL, City jet, as far as i know, only operated small planes such as BAes and SSJs.
The top two are from the Alitalia fleet. Also now that i mentioned it @shill fix the Alitalia reg.

It’s also complicated as to how their fleet is purchased. In the case of AZ at the top, you will notice the registrations start with EI, those are Irish registrations, not Italian, because most likely they are leased and a lot of those transactions go through Ireland for Tax reasons.

So while the theory is still the same you can’t always assume that a registration on it’s own will tell you what airline and where.

many airlines buy blocks. Jetblue did it (although even some of their ranges were taken by others prior to the purchase), BA do it a lot with their various fleets, then you get the vanity versions like VS and the now defunct WW (TF-DOG, TF-CAT anyone?)

i do agree it would be fun to see this, but might be a little complex to program for our own fleets. Given the number of players would vastly outweigh the number of airlines in existence.

I am aware of this, they are leased theough an irish leasing firm which was part owned by some ex AZ management (long story

can’t always assume that a registration on it’s own will tell you what airline and where.

I know i wasnt even talking about that, the entire point of the topic was to suggest some type of more organised reg. system that has some IRL features (like the occasional alpahbetical order)

I dont know what you mean by this. I didnt imply that every player should have a coresponding airline to their name, if thats what you thought i was suggesting.

two planes with the same registration

Yeah thats quite a nuisance. We complained about it a bunch

. VA is only the start of it. BA A380s, BA and AZ A320s, Ryan and Transavia 737s etc etc…
Edit: also non existing registrations. AZ has one, Ryan has one 5 character one, and a 7 character one, and idk if there are any others, cant remember rn