I came across a rather annoying bug at Bari (BRI) while attempting to service @pilster ‘s large planes (A350). Both large stands were full at the time, one with a plane active on it and the other with a plane still waiting to land from earlier. I rushed the active plane to make room for the player aircraft and had 3 minutes of time left when the plane active on the large stand was ready to taxi. Upon the completion of this, the plane would not move. There was a medium plane taxiing from the terminal and it was holding for that but after it moved, the plane still held still while time was depleting.

I logged out and back in to reset all departing aircraft and the plane was still on the large stand and it finally began to taxi and allowed for the stand to be empty and make way for the player aircraft with still 2 minutes to spare. What happened next was the problem: the clock continued to go down even as the plane landed and taxied to the stand. This is a major inconvenience for both of us as the plane takes 8 hours each way and I was robbed of being able to service it even though I had plenty of time left on the clock.

I’ve had this happen to me once, never really thought to much of it at the time. Didn’t know this still happened. I have noticed some pathing issues have returned at SAN as well, seems this one has gone under the radar until now.

@ukplanespotter757 glad to know I’m not the only one! I thought I was going batty at first

Just to note for me personally I don’t worry to much about aircraft not being serviced, everyone has a life including me. After about 2 weeks if things become erratic or stop I’ll drop the connection but generally I’ll keep it open as long as its wanted.

As to the bug I vaguely recall it being an issue after an update a while ago but thought it got fixed, I’ve not had it for a long time.

You did a mistake of logging out of that airport
if you are handeling connection planes and if those planes are under radar waiting for you to assign a parking stand, you must not log out of the airport at that time
if you do so then the aircraft has less than five minutes left for handeling insted of original time

Then that is a pretty sad when large planes, especially in Bari, take at least 3 minutes just to taxi to the stand and even more so when there are just 2 large plane stands that the planes tend to get stuck when there is any traffic on the taxiways. When there was no obvious plane in the region of the large stands when the aircraft was cleared to taxi (only plane taxiing just got off the runway) then I consider that a glitch. I’ve had more issues with Bari than any other airport.

Your timing of planes is perfect if it weren’t for that issue that came up. I do think it is something that should be looked into in regards to Bari. There’s apparent pathway issues that could be causing an issue with those stands. Too many large planes at BRI General discussion

Unless I’m mistaken, you can only service up to 2 large planes at a time at BRI, yet I’m getting 2 large (player connection) planes in queue while I already have 2 large planes landed or on the apron. Even if I pay for the speed up, I usually can’t clear a large plane slot before the queue times out. Is there any way to work around this, or do I have to ask my connected player to only send 1 large plane to BRI?

I think thisfeature would help a lot in Bari Airport 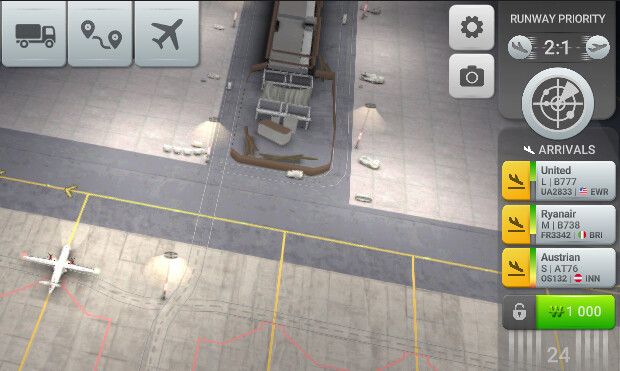 - when airplane times out in arrival queue, it will not disappear, but it will wait for free stand and will land automatically - no penalty for timeout - such airplane behaves normally while handling (reward for handling in bonus time remains)