Hi everyone
Was just playing today when I saw this 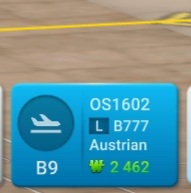 Wasn’t sure where to post as nothing I have seen relates to this. I thought that B747s were meant to give more money than B777, as I compared these prices to other planes, and that was correct. And does this probe that have a full airport of X’s isnt the best?

Fuel price is randomised. Generally te 747 give more money. But sometimes you find them with lower fuel so they’ll give less. I believe its planned for the next update to give the planes a fixed fuel price (depending on the type of plane and the distance to the destination)

It isn’t . Airports charge a fee for using stands for a certain amount of time. So the longer a stand is used the higher the fees are. In addition airports charge more for the usage of the jetbridge so I wonder if that will be added as well but I doubt the devs will add this.

The only way I could see this being added is as an extension to contracts. So where possible on airports, a specific airline will request a contact stand or remote. It will be interesting if specific airlines to specific terminals or stands also come into play, but again this would require a lot of work to develop the contracts addition.

By base income, do you mean handling?

Yes but @Plane_Enthusiast refers to the base price/handling fee changing depending on how long each service is being used.

Oh. Each service is the same time length, except for boarding where jetbridge is less time. Cost is still the same though.