Nagoya - Self assigned gates on arrival 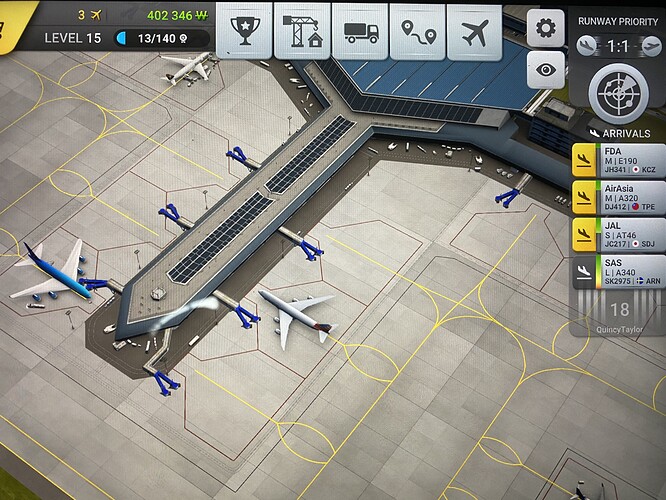 All arrival flights that are about to time out will not disappear. Instead, they stay on until a gate is available and is assigned without player’s control. The player should have control of what gate is assigned. This was noticed after the recent update. Please remove that feature.

It was just added and there’s been much bad feedback, I really don’t care about it

The player should have full control of where and when planes arrive.

They could make this an option feature

I will leave this game if they don’t fix this. Totally BS. Is this my airport or not?

This app puts me as an airport administrator and as ATC or Ground Control. That means I decide who lands and who doesn’t. Your latest update betrays that.

I’ve been playing for an hour at NGO. At least ten aircraft have landed that I never gave clearance to land. In other words, they were in my landing queue and I did not assign them a gate. Nevertheless they land and are now chewing up space at my airport.

Seriously, this update is offensive to anyone who understands the very basics of air traffic control. Maybe I should say this: next time your on a flight; do you want your pilot to land if he had not received clearance from Approach?

You need to fix this, now. I’ve given you at least 200USD since o started playing. I’ll take my money elsewhere. Your new “gradient” livery is not worth the loss of control.

I agree you should be able to choose the gate they land it, it should force you to choose and not allow you to land another plane that is behind it until you have. Obviously, the easy way around this is to assign a gate before it times out.

I like that you can’t just ignore inbound planes anymore - I’m guilty of previously ignoring planes I didn’t think were worth the effort. Someone previously suggested having the ability to sell/close slots, that would certainly work well with this new update; if you’ve got a slot opened for an airline/destination you should have to deal with the flight but you should then have control over closing as well as opening slots.

I’m no genius on game mechanics but isn’t it up to the gamer how they play the game. The devs make a point about making it more realistic that you can’t ignore planes anymore just because you don’t like the size of them, to them that’s unrealistic. Fair enough. They are quite happy however to put comets, concorde & numerous other aircraft that went out of production decades ago as gold plane purchases. Talk about having your cake & eating it.

I should mention I don’t like the new landing system either.