I need to know the requirement of golden planes to unlock coloured liveries for A380, B747, B777 and B787 or else you can share a screen shot of these liveries like this

I think you should see in the hanger because if you unlock the plane, you can see all the liveries without even buying. I think the waves are better, just my opinion, I have not unlocked the 757.

Can’t screenshot as I’m at work, and have opened pretty much all of them anyway. 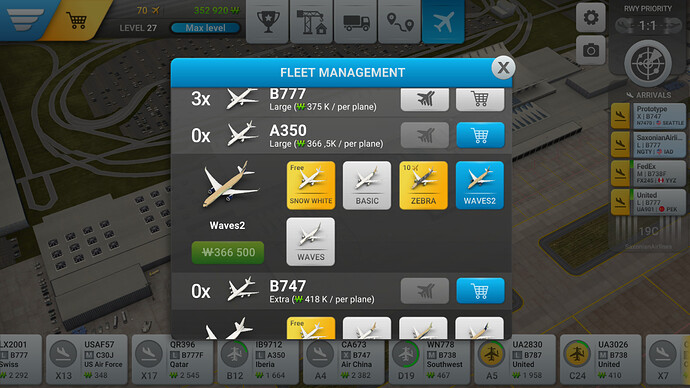 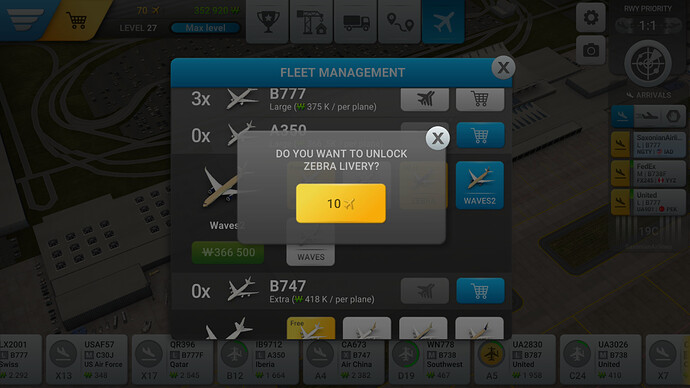 Thanks bro I really needed this one

How hard and what is the work for getting 70?

@rito It is 35 M planes in maintenance D. I think you can imagine how much time it will take.
Or it takes few minutes to donate the devs with purchasing the golden planes for real money.

35*50,000= 175,000 W but I do have is 8 M planes and I need 10. I need 2 more but I still I can buy more. I liked the time most when we could sell our planes for many golden planes. I have downloaded the game in April but started my fleet in August/September but I didn’t get to maintenance C.

Everyone liked that period but it was weighted way too heavily to the player, I managed to earn way too many planes that way even though I also bought them for money too.

It wasn’t sustainable financially for the devs, so it was a choice. Leave it as it is and risk the game. Or change it make some money to allow the additional development that is coming through

I was sad as many were at the change, but my financial background said it was absolutely necessary

I wonder where you learned calculating

Well isn’t this unfair for players who are returning to the game or new players as existing players have already cashed out too many golden planes while us lot have been kept far from it. Shouldn’t all.players should be given the same opportunity to earn gold planes to unlock cool stuff like all the other players who were there just a few months earlier.
If you are talking about business model, I am in India to get a concorde you need 1000 golden airplanes, from market I need to shell out 1699 *10 Rupees, it is cheaper to buy a Apple AirPods with Wireless Charging Case. You really think that the price I would pay for it is worth it?
I think what will be more worth it is giving the same opportunity to earn same Gold Planes as all the other players who have already played this game.

I am trying as hard as I can to get golden planes but it isn’t helping much. All I could do is wait for minutes or wait for months or even years. Anyways If there would be trade in the game and total amount of money for golden planes, then I couldn’t be doing GP farming because of your help and information given. I could play the game even better because of you guys.