Sorry, that i must tell it, but new update is horrible. Game start to lag, new minigame start at almost every second plane. New destination system is chaotic (what about some tutorial?)
And some generic plane, which i have on airport before update just dont start. I have 2 Lufthansas at IAD to Munich, and they just dont start, no options to buy slot. 2 planes to LHR same and i have free slot, same to DXB. And there is more…
I dont mind, if my planes cant start because i dont have slots, ok i buy new destinations, but generic planes should works same way as before. Just like some filling between my planes, not as filling of my stands.

And new minigame, you know, that somebody play it on calculator, before is minigame loaded, plane just land. So no reason to play it.

I like, that you care about game, but i love it, because it was simply nice game. Now you making it more complicated and worse to play.

Landing starts for every plane owned by player.

Minigame provides money for succesful landing 100/100 + its not mandatory to play it like other minigame. It is not devs fault people play on calculator I guess?

Many reqiested better graphics so here it is.

I like new features and that it is a little bit more difficult because it was too easy, others may not like it probably and they choose to use statements horrible. Life.

Ok, some kind of tutorial maybe is.
But as somebody already wrote, what about minigame is same as parking minigame, so cca 1 of 10 planes? Not every.
As i say, i dont have problem with destination on my planes, i just buy new. I have enough cash.

Well, its not dev fault at generall, but kinda is, when game working fine, and after new update it is laggy.

But my biggest problem is, that generic plane dont start. And i would say, that its all planes, that i have on airport before update. Even restarting game dont help.

And i know that some changes happens, but they shouldnt make game worse to play. I play from day 1 and see lot of updates, which was fine (except that one, which bloking some player from playing because of cannot logging). But this one, really make me thinking about stop playing, even when i love this game.

EDIT: And why is problem for game to be too easy? If devs want to earn more money to pay for serves and etc (no problem with that, i already buy some gold planes to support), just make same special offers, make and selling Mriya or Beluga, for example.

I play on calculator (Iphone 6). Before NGo came I was able to play all the airports with no issues. With previous patch I got crashes every few minutes on IAD and NGO. With latest patch I cannot load any airport = game crashes on loading. The game was great and simple. Now it is still great but it getting more and more overcomplicted and overhelmed and very HW demanding. I am sad. I love this game but cant play now.

I had this come up the first time I loaded the new connection screen. If you can’t see it, do you have the question mark button in the top left of that screen? You can see it in the background of this pic: 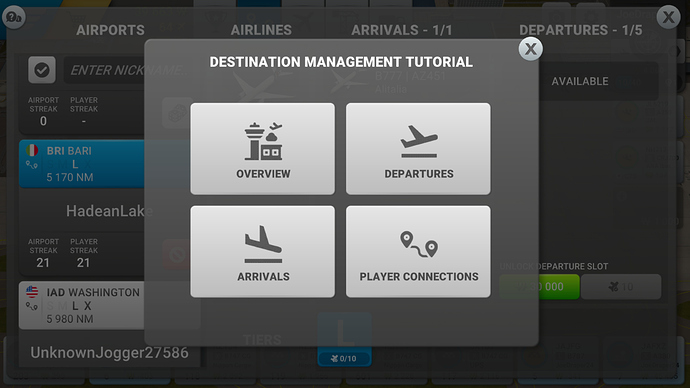 As far as lag goes, I’m on an iPhone 6S and have had no issues with the game running/lagging/graphics at all

Your calculator is better than mine.

The problem with this tutorial is that the game is still running in the background. Before I, in my dumb mind, understand what I have to do the planes are running out of time.

I hadn’t noticed that. I guess you’ll have to just hit the stop arrivals button or something while you read through the tutorial aha

How does this tier system works in destinations?

When you handle an S or M plane from that destination, it goes up. I think then those are the tokens you spend on unlocking more arrival/departure slots

its not, about arrivals, but about servicing time, you cant stop that.

Maybe I should have uploaded a pic. I mean these token counter things go up by 1 when you handle a plane from that destination 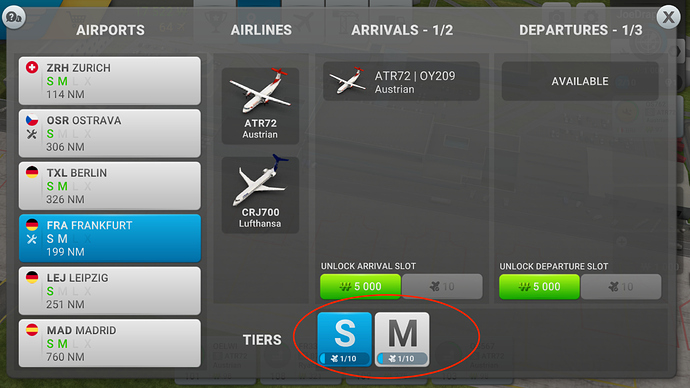 I think its quite good tutorial/explanation overall: 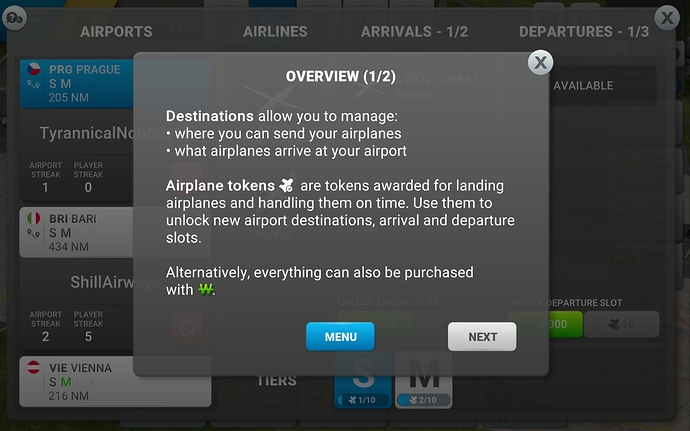 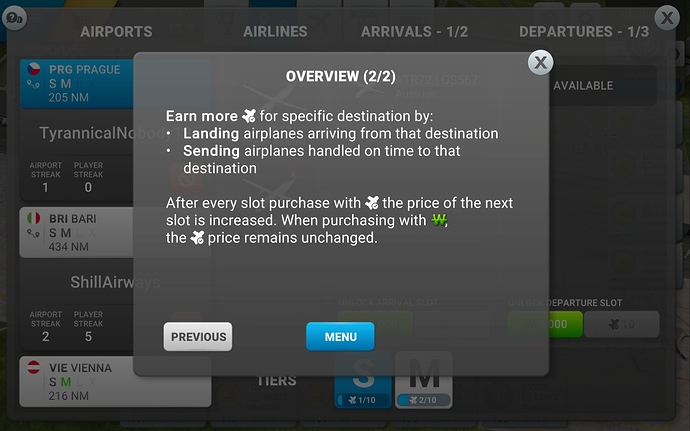 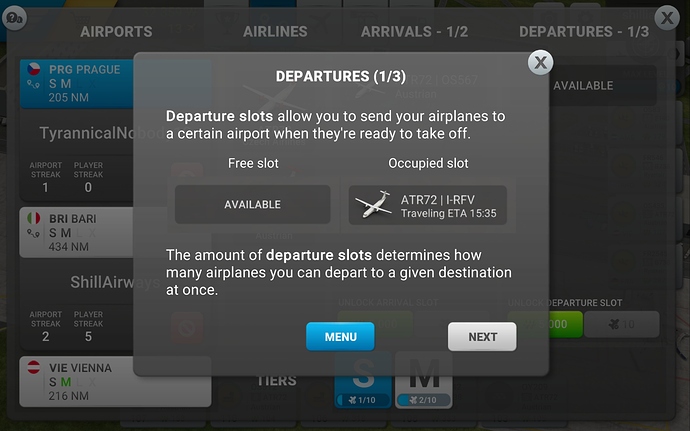 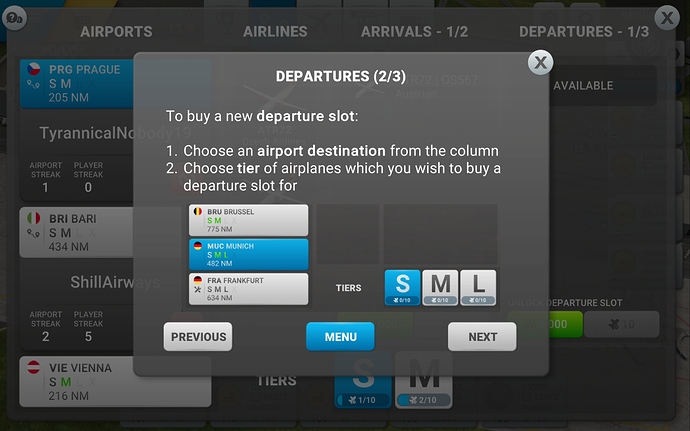 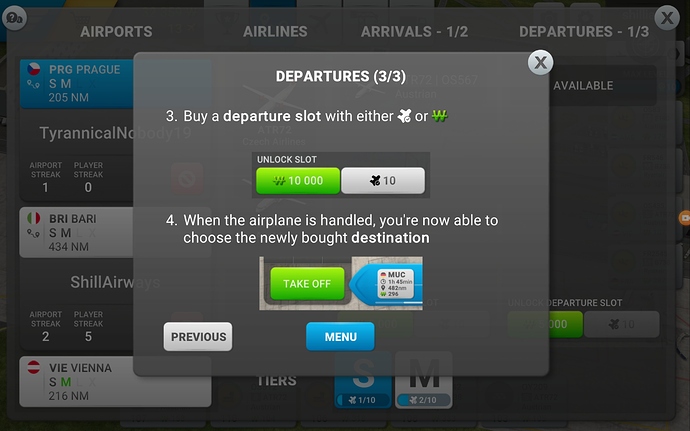 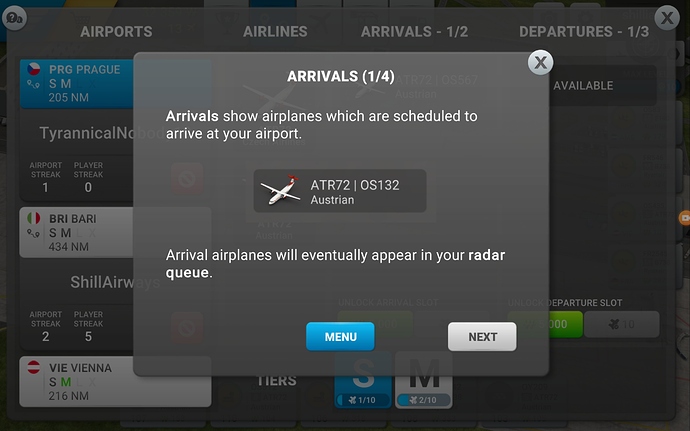 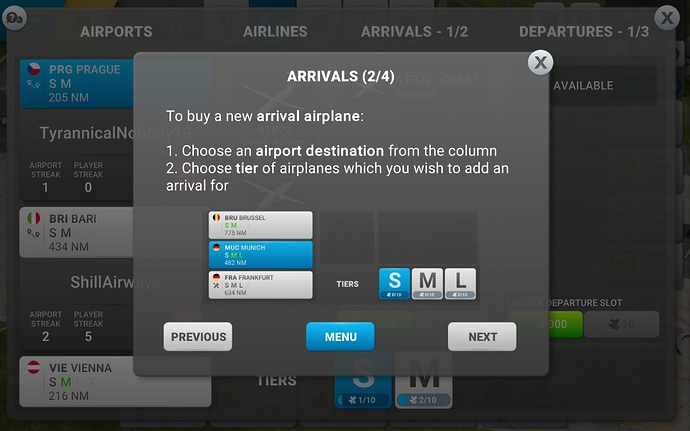 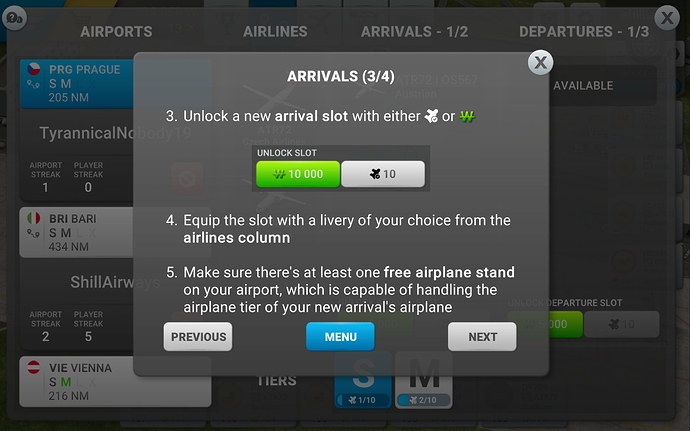 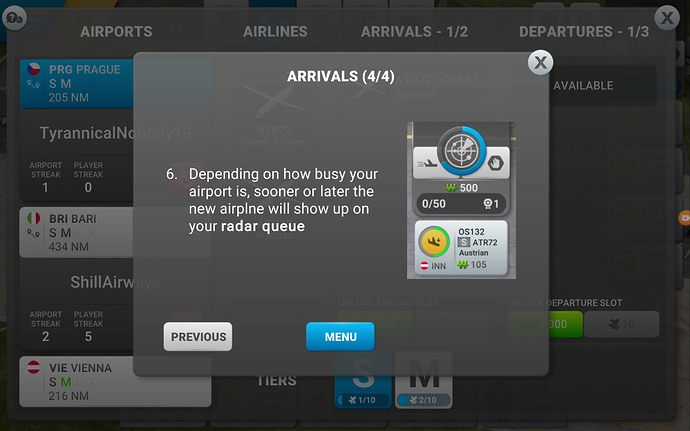 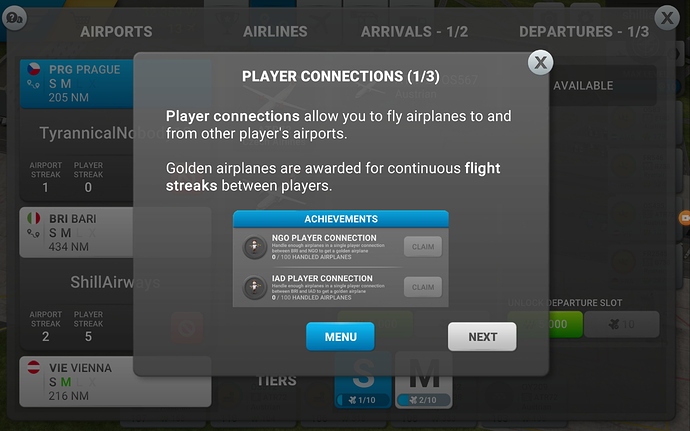 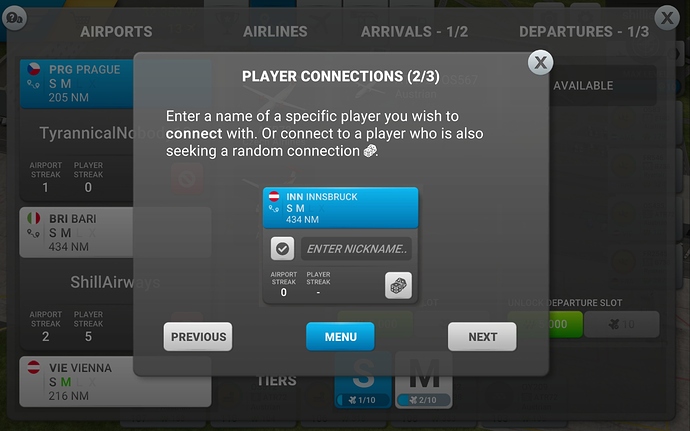 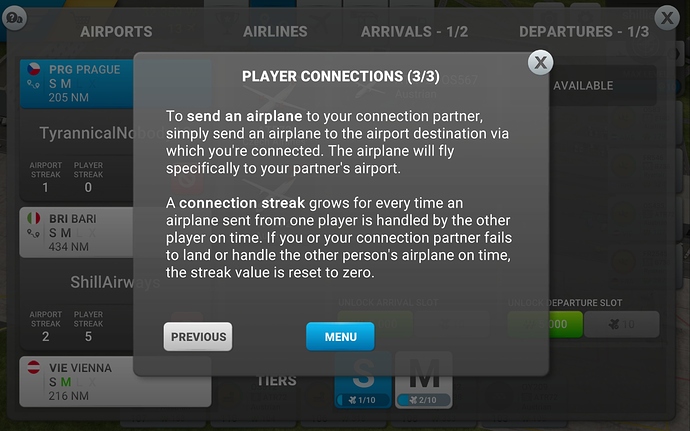 Sad story. Only hope is probably remove the game from phone in that case.

What information are you missing, maybe we can help?

I think the tutorial is very good and a lot is self explaining while playing. It is just a lot of new stuff

Only hope is probably remove the game from phone in that case.

@shill the in game tutorials you shared are helpfull, but the fact of the matter is that when you load in an airport with 20 planes holding and not being able to send them or running out of arrivals slots you get very confused. Im guilty of this. After a bit the system does make sense but it took a solid hour of play for me to completely grasp the system, which i do think is better than before. Also a lot of us were left without cash to buy arrival and departure slots.

I firmly stand buy my thought that you guys should have at least given us a one day heads up that everything was changing, and you could have shared the above tutorial screens so that we could study them a bit.

whats missing?
How long is departure slot in use. Untill plane take off, or until it land in destination? At morning i have occupied departure slot from plane which i send at night.
And uif i have 5 departure slots, send 5 plane in a time and 1 arrival slot. What happend then? Came back only 1 plane, and it will be occupied arrival slot all time, while traveling from destinations? and what about rest of planes? when they arrive?