Purchase not showing up

I spent real currency to buy gold planes, but when I convert them to buy aircraft, they don’t show up at the airport, nor in the hangar (main screen).

You should post this on their facebook. It’s somehow the medium through which they communicate with players.

Are you unlocking the plane or buying it?

Right. Could be the problem.

Unlock is one thing - purchase is another. First planes have to be unlocked (for goldies) then you have to purchase them to own one.

Thank you. I think I understand the process better now. I wound up buying aircraft colors (a waste when you don’t own the planes).

As I understand it, I paid $3.99 for 10 Gold Planes. I needed to convert the Gold Planes to W currency to buy the 737 (W96K), but it shows 8 Gold Planes, so that’s where I failed to understand their logic (not sure why that step is included - seems overly complex).

Is there a way to tell which plane types are unlocked?

Under Hangar you’ll see any plane in the game. When you tap on a plane on the list below you can see an information about this plane on the left side and there will be a golden button named UNLOCK and the number of gold planes you need to unlock this plane.

With thanks. I feel like there are three major angles to the game (basic, connections, and owned planes), so the game can last for a long-ish time (good).

If you have another question don’t hesitate to post it here.

Thank you, so I finally bought planes with your help. Thank you to each of you.

My next question is that it reached the end of the lifespan for Maintenance A. Does this does this mean I have to sell the plane now? 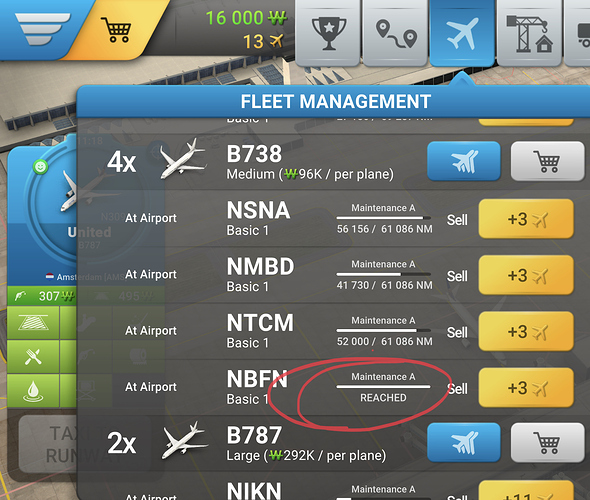 Hi, you don’t have to sell it if you don’t want to. What happens is when you have finished handling the plane and it’s ready for take off, instead of being able to send it to a choice of destinations, you will only be able to send it off for maintenance. Maintenance A costs you 10% of what you paid for the plane I believe, but you may also have to purchase the destination, which is 10,000 W I think because it’s an M stand. Hope this makes sense

@JoeDraper24 explained it all. I wouldn’t sell the planes. It may look expensive on first sight, but you always earn enough money with your planes.
I don’t have M or S planes in IAD, but I guess all will be send to Seattle (SEA) and you have to pay to unlock the airport for every plane size. The smaller the plane the smaller the prize.