Would it be possible to get a statistic how many planes of an aircraft type have been bought by players?

Since there is a lot of demand in the forum of players that want to see old aircraft I don’t see them ingame when I have to handle them at my airports. Most players tend to use actual aircraft types instead of the old stuff. So my question is if devs would be wasting time developing old models that will be used by a loud minority only?

Comets are worthless after the update that changed gold plane value and revenue. Got rid of mine after the maintenance issue with that update, and it’s value going from 36 gold planes to 2.

It would be nice to know how many of each aircraft type has been sold, and how many passengers our aircraft have carried over their service life with us.

Honestly I think most of the older stuff will end up as reward types for completing levels rather than playable.
Personally I’m an Airbus guy, I currently have 274 aircraft (down from over 350 before the update)
My long haul fleet is 90% 350 and 380 with a smattering of others thrown in for research purposes, plus Wave livery on a 747 is wonderful

I’ve got pretty much all the current cargo options

I run both… Airbus at INN, PRG and Boeing at IAD, SAN and NGO. I just cashed in almost $W1m on maintenance for A380,s D.

What’s the best course… sell to get 4 gold planes or does maintenance roll around back to A?

how many passengers our aircraft have carried over their service life with us.

Sadly 1 have a small fleet. I want to have long hauls but I can’t buy. 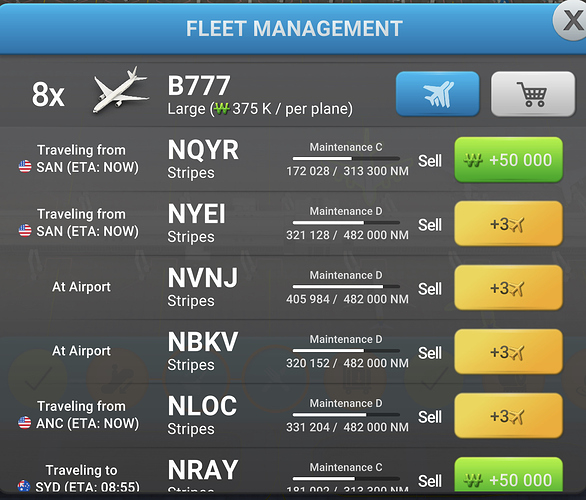 Crap… thank you! I’m trying to get more gold planes so I appreciate the tip… so, sell just before running out of D… got it! Love you, man.

Yep you got 12 coming right there

Mainly a Boeing man here, especially the Ms. I let the big ones generally go thro maintenance D & use the E190s for the golden planes. You can buy 9 of them for one A380 so get 18 golden planes instead of 4. Just put them on the longest route I can, I don’t think I’m the only one doing this judging by the number I receive at NGO & IAD. I did try the jetstream from SAN to IAD but apart from it being unrealistic it was gone so long I thought it had disappeared from the planet!

Do you have many L/X? How do you deploy those?

I have a lot, a few go on the long haul connections but the bulk go on the shortest route I can get them on.

I do the same. Thanks for the collaboration.