Loving the game but I’ve gotten to the point where I’m waiting for planes. Even speeding it up i have no problem keeping up and have open stands. And with the update that allows only limited time speed up more waiting then playing. 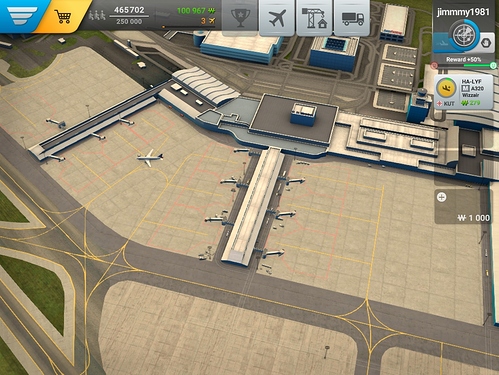 3rd batch of changes coming (for mechanics) that will also increase “occupancy” of stands.

same here, my staff on the ground is too quick to so i’m always having about 5 or 6 planes in action while way more are waiting for depature at the runway. hopefully the activation of the 2nd runway will challenge us a bit more.

Except activation 2nd runway will not happen ever as it was mentioned already many times.

What could and maybe will be changed - line up and wait procedure for faster arrivals, 1 or 2 extra L/XL stands (22 for example).

Personaly even during alpha/beta I said that having max 15 handling equipment is way to many and it will make less of a challange for players (and in fact it did so). I think dropping it to 10 should also help.

Planes will not taxi 50knots either because thats almost rotation speed for prop planes and would be total nonsense.

Couple of more ideas are there but that will not happen fast as Washington is in focus and not much more except that.

i’m far away from 15 handling equipment, max is 8

my guess is that the massive amount of s-stands support the traffic jams since they can be handled very quick. extra L/XL-gates would be fun.

looking forward to some new challenges at Washington

And only having a small number of airports to send planes to, and awaiting them to go live again to send out more, has I am now getting stuck with many a/c holding stands

i’m having the same issue now. especially in the morning there’s a big queue at the stands with planes that want to leave

since there are some unserved airports on the radar map we will hopefully get some new destinations soon. it would be cool to have some airports that serve distances between bari and those arab airports from prag (let’s say about 120-150 minutes flighttime for A320/B738/E190). i don’t know how easy this is to implement but it has to be less challenging for devs than building a new airport.