Congratulations to the dev team, forum members, moderators and players for this great game!

This was posted on FB and give a heads up for things to come.

Happy flying to you all! 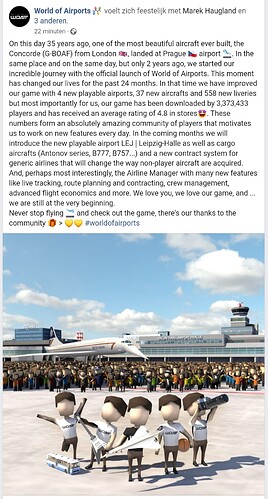 The future is bright for WoA, and it’s only going to get better!

I was a little late to the party with November 11th 2019. But I stumbled across an absolute gem of a game.
The defining point for me has been no ads. It makes it a breeze to play and to watch the development has been truly amazing when you remember that this was started as a hobby game and it’s grown into a fully fledged game.

As you can tell I’ve invested a lot of time and effort into the game (and money) and it’s been well worth it. I’m thankful that I have gained the ability to help the devs in a small way with the forum and other things and long may it continue.

Andy,
That is not unnoticed by me and other forum members. It’s your friendly guidance here that contributes hugely to my enjoyment with this game.

This game is wonderful, I also joined at the beginning, and I sincerely thank you for creating such a magnificent game like this.
Greetings from B4RRERITA AIRLINES
Note: where are the fokker 100 kkkk

put GRU as next playable

Lej is already confirmed next sorry

I joined back in the a319 update, forgot when that was, and was pleasantly surprised that there in fact is a decent free mobile game for me to play, and I’ve enjoyed it for a while, I’ve been here almost a year, but not quite a whole year, but I hope to enjoy another few years, congrats for two years everyone

I am impressed with the dev team and its backers for continuing to improve upon and grow outwards a up and coming title, as most games only have a release and one version this one is moving in the right direction. Too many more years of expansion and improvement!

P.S. not sure LEJ was a good choice, to better picks in the future!

not sure LEJ was a good choice

The devs do nothing without reason. Expect nice surprises in cargo handling

Look at the layout of LEJ, I think you might not be so unhappy. Plus I saw a dev comment about allowing take offs and landings on both runways…

I am exited for the new feature Airline Manager the devs are working on.

Well; I’m not much into cargo handling yet, maybe a better pay/demand system would make it better (airline manager maybe?), and not much into short European hops (may the airport gods provide us with NSW, DMM (although we have MCT and or GRU in the near future!) . Maybe I will be pleasantly surprised with LEJ!? X=

MCT is already in the game.

(although we have MCT and or GRU in the near future!)

That is what they said.

Yeah, they were saying “we have Muscat, and GRU in the near future” just without the,

They did say and or, which implies it wouldn’t be in the game yet.