Not sure what 1.25.11 brings. I still get penalized for leaving my fleet at the gate for any non game-play time.

I just returned to the Apple store, saw an update and downloaded it. Changed version to 1.25.11… but my fleet still penalized (see updated photo). Is this how the game play is supposed to be? 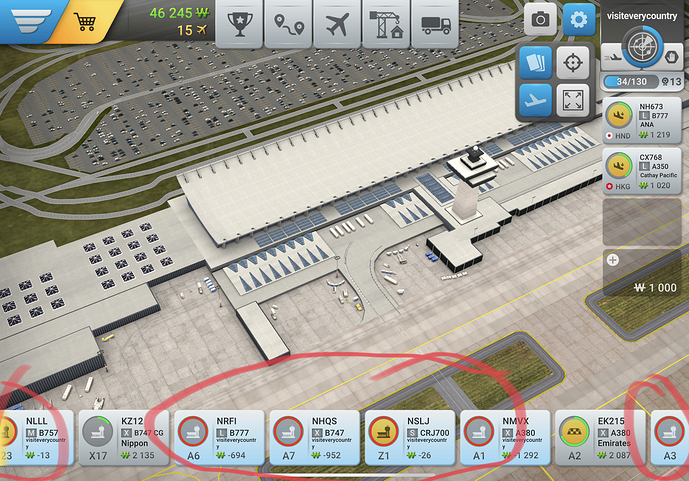 You just need to handle your own planes in time now to get the level bonus. The timer starts once the plane arrives at the gate, but as soon as the handling is done the the timer stops and you can keep it on the gate as long as you need. I think it is a good solution. So all you need to do is handling your planes faster.

The new destinations are in the game since a few minutes now (at least in my version). It always takes a little time after an update until all new Airlines and destinations are visible in game. Just be patient, I am sure you will see them soon.

I have about 50 planes at IAD. Trying to play them all the time or keep them off the gates all the time is tough IMO, and a disincentive to having a large fleet. If this is the case, we just reduce the fleet or just keep them holding until we can get a longer period of time to play.

I don’t mind missing the level bonus. The negative hit is the disincentive.

P.S. I am so enamoured with the work the developers are doing. The game really is incredible to play.

I can see where they are commi g from. However the fact that when the game crashes… which happens regularly… the timer of airplanes gets cut down or whatever… really makes no sense. I have had once an A380 who was about to land… game crashed and when he was at the gate I had 20 minutes left to handle it. No bog deal at all… game crashed a 2nd time… while just at the gate… suddenly 30 seconds left to handle every single thing. So you are penalizing a player… because the game crashes?? Yeah… sorry but somethingnis off there…

I have about 50 planes at IAD. Trying to play them all the time or keep them off the gates all the time is tough IMO, and a disincentive to having a large fleet. If this is the case, we just reduce the fleet or just keep them holding until we can get a longer period of time to play.

Don’t get me wrong, I can totally understand that problem, because I have more than enough own planes as well. For me it is almost impossible to handle every plane in bonus time at IAD if they are all coming back, or if all the tags are reshuffled after loging in, but in general I think it the new timer is a good thing.

By the way my strategy is that all planes I wasn’t able to handle in bonus time I keep on the ground till I reach a new level as you can’t get relegated to a lower level.

The new timer just makes it a bit more a challenge.

I also had it alot of times now that the timer goes on on your own planes when you close the game without leaving the airport, because something in real life needs your attention. But it only happens to your own planes, not to the generic planes.
Also, like @Resource said, the game keeps crashing from time to time. And when you go back to the airport, the timers of all of your planes are down to 30 seconds even when they had enough time before.

I am probably lucky then, it never happened to me so far…

For me it is not the game that crash but network instability sends me to main screen again.

Release was to fix priblem for many where IAD was freezed.