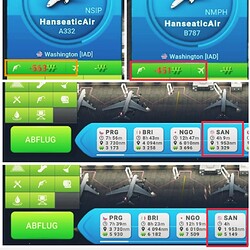 What is the cost of the A330 with Gold planes and money?

Yes, thank you for the answer

Guess im saving for 787 then

One question. Were those both new purchases, i.e before they had taken a flight, or after they had come back from SAN on a previous trip. You can really only compare a like destination, once the aircraft returns from that same place, because the fuel calculation is based on the prior destination not the next one, and with delivery flights, that cost is random.

If they had come back from SAN, that is definitely quite a difference. I’ll still buy the 332, as i’m airbus guy generally and have enjoyed my transatlantic trips on them.

I can confirm it uses more fuel than the A350 for the same destination. As has been pointed out it doesn’t earn a great deal more than the 757 so personally I wouldn’t use it for long haul connections. They come back with a big fuel bill which nearly wipes out its earnings from any flight it does next.

They both came Back from SAN.

I personally think: like most of the new planes in game it is not worth it to unlock. It is nearly impossible to make money with it. I personally prefer Airbus planes but if you need to make a decision and you don’t have plenty of golden planes go for the 757 for flights like SAN-IAD or within Europe and the 787,350 or 777 for longer ones. All models are much better deals. The A330 is unbelievable slow and needs a lot of fuel.

I think the biggest advantage of A330s is the smaller capacity and thus faster handling time at small airports like BRI, PRG & SAN. Also your connection partners at those airports will thank you if you send them an A330 instead of a B777.

But as mentioned, for earning money and goldies there are better planes.

Yeah I agree, after using them for a couple of days that’s where most of mine will be going. Sorry IAD-NGO connection, your stuck with the A350’s

Did anybody unlocked A333?

I did already as well. I bought one in SAN. Seems B787 is still better choice in terms of profit. I don’t see any advantage of A333 vs B787 at the moment. Maybe I missed something?

Profit depend only from passager’s number, so the more aircraft can carry passangers, the more profit you can get. Plus profit from per passagers most of aircraft on same destination nearly same. It’s Like 8,25-8.26 W per passangers, on short destinetion . Plus there is some factors like speed of aircraft or time traveling to destinetion, that give some bonuses for profit.

Another thing, profit per hour =)