The devs are working on a new plane. People from the Discord and FB group identified it as Antonov An-12. 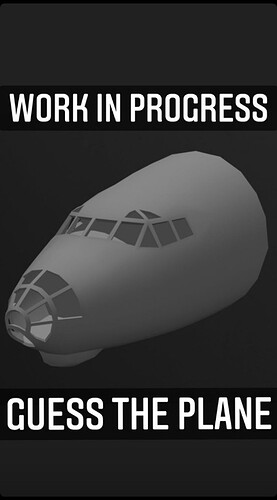 It better have smoke bellowing from its engines when it takes off!

Also what category is it? Will it be an M or an L freighter?

I think it’s an M cargo

Interesting. Will be interesting to see how much revenue it earns. Not exactly a fuel efficient aircraft.

I don’t own one (unlocked though), from what I’ve seen they are horribly overpriced and really low earners.

I think it’s an M cargo

It will be M cargo, for S size it’s too big and for L size it’s not that large and the range is not that good (Speaking of sizes, why are the plane categories divided by sizes and not ranges?)

The 737MAX7 will want to know that, same with the A220 when it’s released. Both of those have a huge range for their size…

Both of those have a huge range for their size…

Those planes are marked as “mid-range” anyway… But yeah, if we will get A321NeoLR, they will have to make another aircraft size category.

On a design standpoint however, the A321neo and A321LR are EXACTLY the same. When talking to a guy I know who is in contact with Airbus, he showed me a couple of charts that literally demonstrated the difference between the A321neo and LR, one extra fuel tank in the hold. What is cool about that though is that in theory, you can convert any A321neo into an LR or vice versa… That’d be an interesting feature to see in the game

Nice to see they are adding more Russian aircraft, can’t wait for if they add the an-22, it can be an arrival alongside the 225 and service all airports, as It could be an L or xl prop, it would be the first contra-rotating prop aircraft

You have also Tupolev, sukhoi and other manufacturers in russia