Hello here,
I’m currently playing at Prague and I’m not getting enough airplanes. I have lots of available slots and also lots of arrivals but I never handle more than 8-10 planes at the same time, which is getting kind of boring after a while. Is there a way to speed up the arrivial frequency?
Thanks in advance

Yes, there is a button from where you get planes faster. (Can anyone show this in an image, I currently don’t have one)

You will increase the amaount of planes by handling L and X planes (longer handling time = more planes). So imstead of buying new S and M slots, safe money to buy L and X slots.

You mean this one? 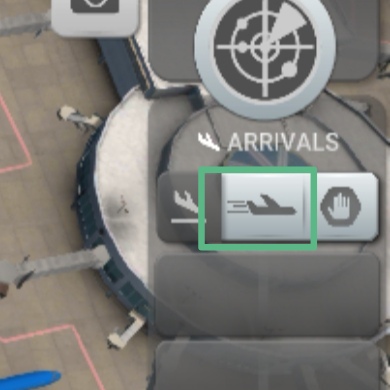 If you planes that button, then planes will come faster.

Yes, there is a button from where you get planes faster. (Can anyone show this in an image, I currently don’t have one)

it will speed up the waiting queue at PRG but not the amount of planes to handle. Since the landing procedure and taxiing at PRG is so slow you hardly can serve more than 10 planes at the same time.

It’s another reason to hopefully get a faster landing and starting option.

There is some gain to be had when you play in “bulk” mode.

That is why you must buy the same amount of slots to gates. I have enough for M/L/X. It depends on how much time you play. I play 30 mins and handle average of 20 planes.

What is bulk mode?

I have the same issue. Regardless of what stands are available or how many, I’m limited to only handling 7 or 8 max at any given time. I have about 12 planes in my landing queue right now but just can’t get them landed fast enough to handle say 20 or so planes at once.

You keep your fleet in the stands and send them away all in one turn. This way the stands are unattainable for other planes and you have the chance to have free stands when the connection planes arrive.

Ok, to be clear, you cannot change the timing on speed of landing or taxiing that’s coded into the game. If you use the accelerator that just speeds up how quickly they show up on the queue not how fast they land.
You can use the landing / departure ratio as 3:1 to bring more planes in but at PRG that risks a large departure queue.
You can help your turnaround times by using certain gates to shorten the taxi times. For example 58 is the closest and easiest gate to receive an L. 65 is one of the best for M and S and 14 is pretty much the best for X.
Using the low gate numbers just increases the taxi times significantly.
The point of PRG is to run S and M planes not X and L, and the taxi time has a lot to do with it. X has to go all the way to the end of the runway before the runway releases for the next departure or arrival and that slows everything down. Running M and S shortens those times particularly S as they get off the runway faster. If you use the 60 gates you can turn them fast too due to the shortest taxi times.

But folks need to understand, the landing frequency can only be changed by size of plane landing and number of planes ready for departure (+ ratio 3:1) the planes land based on that algorithm alone

In addition to what Evildent_Resi said, quit and restart the game.

No outgoing planes will hold up your incoming ones.

I have the same issue (relatively beginner player): I speed up arrivals, and they start coming in, but after a while it just says “NO AVAILABLE ARRIVAL” (or something to that effect, I play in Hungarian), even though I have free stands. No new arrival comes in until some of the older stands become available. It’s as if I had never bought those extra stands

Buy extra routes. No extra arrivals mean you have queued or are handling all of your unlocked arrival routes.

Thanks, I’ll try that!