Different countdown at check-in for refueling

I would like to ask why the refueling countdown counts differently. All other countdowns are running properly, but refueling at all airports is slower than the rest. It is annoying to look at a fully prepared and boarded plane, which is still refueling, even though it has not been for a long time. 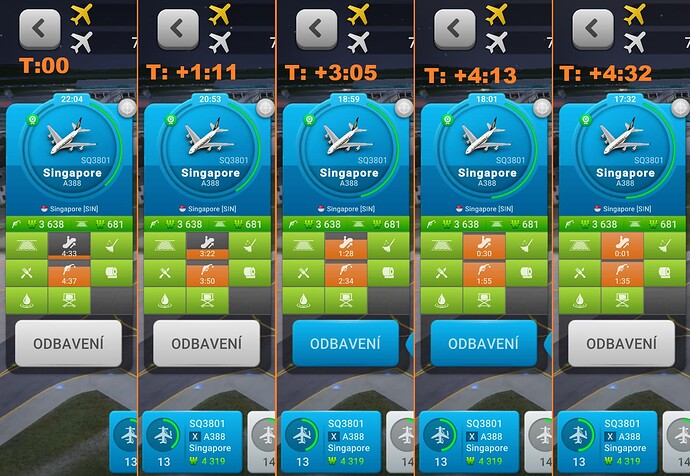 Ok, if you notice closely, whenever you assign an aircraft to the gate, all times will cut by a certain amount. The only issue with that is that if you time it, the time that it goes for is the same as the original time (before the aircraft is assigned). Try it. I know that in MCT, the times are halved. Other airports will have the time cut off by a bit. (It isn’t only fuel that is ‘slow’, it is because it is one of the last service to be completed).
This is only the case when an aircraft is assigned to a stand with a jetbridge. The reason for why it happens, I dunno.

From version 2 will be necessary to refuel withou pax on board or together with firefighters.
Speed of refueling is subiect to check.

So turnaround time will be longer, unless higher fees for firefighters are paid?

I think so that help of firefighters will be somehow paid.

You could also refuel during the cleaning and catering process. Technically no pax in the aircraft

The trick is to upgrade all the services to highest level from the start. Even that doesn’t suffice then use the speed-up wollars.

I have all services in highest level, of course…

Usually A388 takes time, so kinda get use to it.

Only affects L&X civil planes, cargo planes work just fine. Seems to be independent of the airport or the level of service upgrade. I’ve tried PRG, IAD and NGO and levels 2-6 for the fuel services. I also tried lowering the graphic settings, no effect though.

However, it affects all services except bus/passenger boarding.
Fuel is the most obvious one since it usually is the slowest service anyways. But just look at the others, you can see the counter is not counting correctly even without using a timer app. It’s just way off.

//edit
It takes the bus timer exactly 1 second to count down.
But it is 1.5 seconds for these services:

You can see in my screenshots that for 60 seconds on the bus timer, only 30 elapsed for most other services while 40 elapsed for cargo.

So there seem to be seconds and secooooonds

Yes you are right but there are some things you got wrong. 1. It affects all sizes not just L/X. But S/M is less noticeable. The time isn’t always ⅓ smaller either. Some airports have the time double. That’s because the cause of this bug is most likely that the game is supposed to cut the bus timer by ⅓ or even ½ at some airports. But instead it does it for all services. I know that NGO is one of the airports that cut down the time by ½. I heard the same for MCT but can’t confirm it and I don’t have LEJ unlocked yet

Can confirm M but cant find a S with that issue yet. But maybe not all airplanes are affected even if they are the same size? Just had a B787 (L plane) @ PRG which didnt have the issue.
Made another mistake though, water and lavatory are like cargo, also in my screenshots. Corrected that in my previous post.

Did it use a stand without a Jetbridge? Because like i said the likely cause of this bug is the reduction jetbridges have on the bus service.
For S planes it’s really hard since like I said it’s not that noticeable and there aren’t many jetbridge stands for s planes. I do know though that it occurs on the jetbridge stands located at BRI