If we are getting A330-303, then we should have ČSA livery
Possibly WOW air as well

I wonder why they make the E170 while other planes like A321 or A220 are higher rated in the feedback portal.

E170 is an S plane while the A321 and A220 are both M. Plus, what the devs adds into the game isn’t necessarily based on what’s the most voted in the feedback portal.

I mean they have to include all planes one by one so starting with this isn’t bad.

Those engines are General Electric, they have sharp end at the engine, I expected Rolls-Royce on the A330 but not dissapointed.

I would imagine remodelling all the older aircraft is top priority, realising new variants along side remodels.

Remodeling aircrafts will take a long time, so does making a new one but it can add more planes, liveries and a new plane to fleet. Just remodeling wouldn’t make the game better. 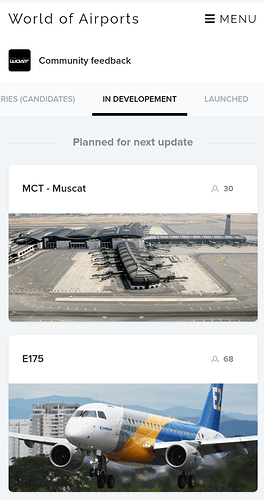 It seems the developers must have changed the variant during development. Makes sense, actually have a S aircraft for MCT now. Hopefully they add Flybe!

What could its cost be? so that I can use it for gp farming and is it an S or M?

Plausible, but we will find out soon enough.

I’ve just had a look at the in development photos of the E-170 you posted. Seems it’s been intended as a 175 from the start, but was labelled as a 170.

It was listed as S size airplane.

Oh ok. Not good for gp farming i guess?