I don’t know if this is a bug or if I’m just doing something wrong but I can’t unlock new arriving planes from some airports although I’ve handled enough to unlock them and have plenty of those silver keys. It’s happening just for some destinations while others are fine. Can anybody help please?

It’s a bug. It seems aircraft are still changing themselves when the game shuts down.

Take a good look at the aircraft flight numbers. In both cases you have duplicates. Probably a glitch in the game settings, but this has been around for some time.

I reported this in September: 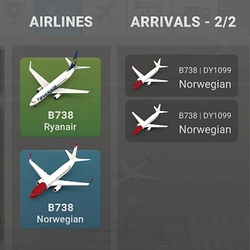 It went away after an update and now it’s back again.

yes, it must be a bug, because several times I had to leave the game to log in again to be able to recognize the silver key, but this whole week worked normally without any problem, but I had several times this problem of clicking on the airline or destination and don’t open anything just get stuck

I actually don’t think it’s a bug since it may just be a feature in the game that lets you have the same airline of the same plane both at the same time at your airport and if you check the numbers at the top it says 3/3 so you’ve reached the maximum resulting in the whole fact that you can’t unlock the delta, either that or Delta don’t want any say at your airport. it’s one or the other…

I was thinking about the doublettes of flight numbers causing the lock, too, but then I’ve realized that it is working at other destinations.

Thanks for your answers, maybe devs can clarify.

For a game that tries to be as realistic as possible, this would be a strange “feature”. I still think that the glitch (or maybe bug) causes this doubling of flight numbers and thus planes, “tricking” the game engine to believe that all available slots has been taken.

The fact that one plane is unchecked and still shows as available reenforce my thoughts on this.

In this update though, we can unlock multiple aircrafts from one airport. suppose 3 so there should be 3 arrivals now you have unlocked 1 777 and 2 777f which means the arrival count is full now you cannot unlock more and the L size aircraft count will go on.