Fleet Management and tips to earn goldies and Wings

I need assistance please.
I’m starting to play the game after a 2 years absence.
I need to ask for help with the title issue, starting from a small, and I mean that literally, fleet of S aircraft. 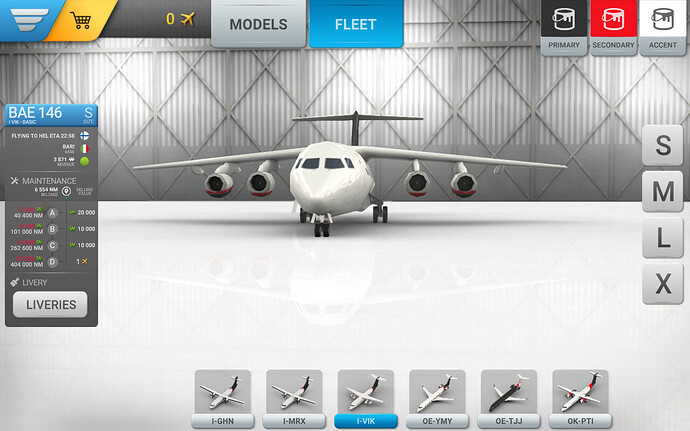 You can buy Golden planes but you can’t buy cash. If you want to know more then just search ‘Playing the Game’ and you can get most of the information.

You misinterpreted my question, my good sir. I don’t have money to buy Golden Planes.
But what do you recommend I do in terms of my scattered fleet?

Best way to earn goldies, apart from level/award completion is to operate an aircraft until C Check, after completion of C check sell the aircraft. In terms of getting them, most players use the ERJ-190, cheap and cheerful as one would say!

Anyways, I am also finding ways to get golden planes and starting a new fleet but it can be a long time if you don’t buy Golden planes. I chose the hard way and @ukplanespotter757, I have planned to buy the 787 and have already unlocked A320. Why?, because all M-tier planes (excluding E190 and Comet) give about 3,000 W and all L/X-tier planes (Excluding concorde) give 9,000 to 12,000 W so buying the 787 as the cheapest aircraft is a good idea and is just 2 times the cost of the 757.

I watch your beautiful pictures of your impressive fleets in the sharepoint threads and I was wondering:

How much money, real money, did you spend in order to amass so many planes?

Thank you very much for your answers

I’ve just been playing for 2-3 weeks, but here’s my strategy: Unlock all airports ASAP and gain enough gold planes to unlock one of the X-sized planes (30 or 32). I just unlocked NGO and already have 18gp just from playing to maximize passengers (to unlock the next airports quickly), so I should be close once I get to SAN and level it up. The remainder I can get from flying the 10 ATR’s I bought in IAD until I can sell them for 1gp each, hopefully that won’t take too much longer. Then you just need under 500k W to buy each X-sized plane, and just from playing IAD to unlock NGO without focusing on money I got enough for 2 X planes, so it shouldn’t be long before I can afford a fleet of 10 X planes (is that what you consider “so many planes”?), no real $$ spent. That’s all assuming it doesn’t get too repetitive and boring before I achieve this…

But then again, the devs need $$ to continue working on the game, so if you want to buy gp’s with real $$, I won’t make light of you or anyone else. Just personally, I like the extra challenge of playing without spending.

Here’s the majority of my fleet at SAN. (Apologies for any video glitches) I have been playing since November 19 (about a month after initial release) and I have probably spent $150+ on the game and I’ve also gained a lot of GP’s from the previous way of doing things. But it was tilted way too far in the players side under that scenario, so the devs made the unpopular but right decision from their side to change it.

I’ve played a lot although less now and have a decent size fleet at all the airports.

My recommendation is to not go crazy and open every single gate, especially at the likes of IAD and NGO otherwise it gets insanely busy in your landing queue and you have a very empty looking airport as a result.

When you open a new airport, as you won’t have your own fleet. Throughput is important, so grind out as many planes as you can, bigger planes give you more money, but small planes turn faster…

Having a great connection partner too helps, you can rack up cash consistently. The popular thing to do is do 100 with a partner grab the gold planes and then move on. But if you find a partner willing to continue it’s worth it as you grow your airport. If you can find other partners it’s fine, but a great partner is worth their weight in W’s

L and X planes are great, they are cool, BUT they don’t actually pay for themselves after maintenance unless you are very strategic in where you send them. M and S less cool but can make enough money unless you send them on the longest runs to cover some of the losses you might take on the L’s and X’s

Don’t go past maintenance D unless you really want to. Planes have no value after that point nor will you get GP’s. But if you want to keep the fleet as long as you can, go for it.

Everyone plays the game differently and that’s ok. Some play to get through it quickly, some play to maximize W’s. Some try to play as close to a real airport as they can. Each way is fine.

Word of warning on big fleets especially of X and L, they take a long time to clear, I once had 32 380’s at IAD, I now have 4. I couldn’t spend the time needed to service them all.

This game is fun, it’s one of the best I have played. In my opinion, and I’ve played sim type games a lot over the years. Just be careful to play to your strengths and times. You won’t regret it and it won’t get boring. Dev’s are great and trust me they have lots of ideas for the game, be patient on updates, they do them as quickly as they can, but it’s a very small team and the coding is complex, new airport takes around 4 months at least.

Good luck with your games, my notes above are only suggestions there are plenty of folks out there that do different things if you want 2nd, 3rd and 4th opinions.

That’s a lot of very useful information, thanks @carlsberg72.

So far I’ve only spent £10 on 50 GP, I’ll probably buy another 50GP shortly; I’ve spent more money on PC games that I play less so I’m more than happy to spend some money and support the devs.

I’ve spent around £20 - £25 (those 79p’s soon rack up lol) but I haven’t spent anything in months. I joined in June or July last year & the last thing I bought was gold planes for the A350 promotion, whenever that was, a while ago for sure.

I’d pay money to support the devs, maybe special planes or liveries, in fact I’m suprised they’ve not done it. Once you get past a certain point the gold planes start building up & there’s nothing to spend them on.

Don’t worry, next update has 5 or 6 new planes coming, that will help you use them. Also save them for Muscat when it comes, very useful to build a decent start to the airport.
I’ve got 629 right now. So that will keep me going for a while

Ha ha yeah I’ll use a few but won’t make much of a dent in how many I’ve got, I’ve more than you. It’s only small aircraft & I probably won’t bother with the new A319 as I think it’s an awful looking plane. Not the model, I think it’s accurate, but it looks like an A320 chopped in half. It reminds me of the 747SP, that was a bit bonkers looking too.

Oh god that’s even smaller isn’t it, I hope not

They all have different capacities and ranges. But range is something that doesn’t apply in the game.

I’d imagine to allow additional options when buying. There is pretty much an aircraft that suites all and adds variety. The game would be really boring with the same variants over and over again. It worked well, yes but really limits what can be done in terms of liveries.

Ok, so different liveries from the same airline for different aircraft types. I agree that it adds something to the game. Had that angle not considered.