Is it possible to have a full occupied airport with all gates taken by planes?

When I have like 10-15 planes in the ground and inside gates, then the first one gonna be empty before the next one can landed.

I don’t think i’m gonna unluck all the gates when they not are needed?

game is not about filling the stands, it’s about throughput. that’s why you get only so many sets of servicing items at an airport. the aim is to get aircraft in and out in a certain timeframe, so you never need all the stands filled up. A lot of people get disappointed at this, but that’s the game as the devs have designed it, whether we like it or not.
Only way to fill up the stands truly is have a large fleet of your own and leave them sitting on the stand until you need to send them or fall asleep and let the game flow (done that many times) but in general game play, stand filling is not the concept that the devs are going for i’m afraid.

I know this isn’t the answer you are looking for, but theoretically, it is possible to have a fully occupied airport. Thus, the response by Carlsberg72 that @OldDog01 linked to is the most honest and proper answer to your question.

There is another one possible way to fill up airport.

The above method works wonderfully at IAD and NGO (i usually have 40 stands occupied there), not so much at MCT where the challenge is throughput, not bulk service.

Just saw this on FB. There seems to be a way to fill your airport realistically. If the devs can… 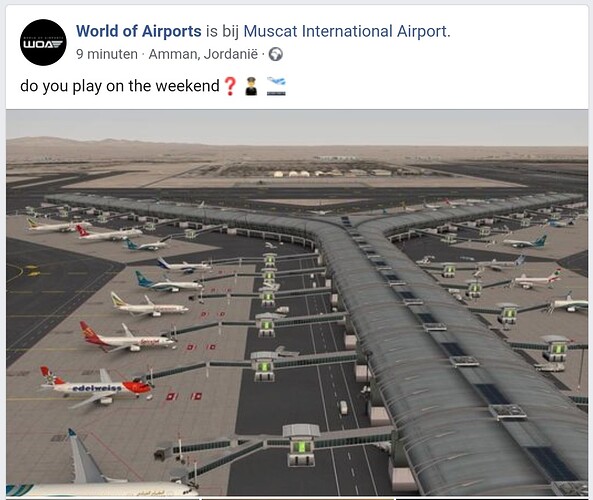 I think they didn’t let the planes take off who are already done handling or they landed 10 planes at once. Also I see that 1 gate empty on the right.

Also one on the left

That does seem on the fuller side of life. Sometimes these pics show things from test environments that just don’t exist in production, so it maybe a set up to fit a purpose.
Or it might be showing what could be possible if certain tweaks are entered into production in a future update. Who knows?
The problem is, with the exception of L/X timers if you want that many planes on the ground you need to run them all through on speed mode so they are sitting there ready.
Landing a bunch of planes at once for MCT only speeds things up a little if you use the left hand side of the terminal as the taxi times are much shorter to get to the gates

Knowing how the game works, it rankles a bit to see this kind of pictures on an official site. It might give a wrong idea.

There is no doubt that the pic is from a testing environment since it’s quite impossible to have an airport this full at one time. That being said, there are some planes where the gate bridge isn’t connected to the plane, and the bridge not connected to the plane indicates that the servicing has been completed. Therefore, perhaps the picture is showing a combination of a testing environment and not clearing planes for takeoff.