I don’t usually gripe about this game because it’s great as it is. But I do have one suggestion.

First of all, put the airports in numerical orders. I’ve well surpassed the amount of passengers (511,872 in PRG) to unlock both Muscat and New Orleans (both need 350k each), but I’m stuck with IAD, and it’s ridiculous target to unlock Nagoya, which then I’m stuck with another ridiculous target (1 million) just to unlock New Orleans (which is 350k). Come on people, this is not realistic. If you had INN, BRI, PRG, MCT, MSY and THEN IAD and NGO, that would make the game seem more realistic. PRG 2035 should be a special unlock with golden airplanes for when you get to that stage and all the airports have been unlocked.

Originally with the current line up, when I heard that Nagoya was unlocked, I was all excited, because playing Nagoya seemed like a fun challenge. But I saw that I had to get 1 million passengers through IAD to unlock it. I don’t have any interest in playing IAD airport. I tried three times to “start” it and all three times failed miserably. So I went back to my favourite more developed airports INN,BRI and PRG (love PRG by the way). But now, I’m needing a new challenge, and IAD I find boring. At least with INN and BRI, I had a sense of achievement when I unlocked medium and/or large aircraft. With PRG, the only things I get a sense of achievement from is having new airlines or buying more planes.

I’ve invested real money into this game. It’s not much, but it’s enough to keep me wanting to see proper things in the game. According to the details on the App Store, you can manage the fuel trucks, catering etc. I don’t see any option for doing this (unless I’ve missed something somewhere and I’ve been doing it all along).

By the way, I attach a picture of my current numbers showing that I’ve well passed the Unlock amounts for Muscat and New Orleans. So please could this be fixed in the next update? (And everyone who already has Nagoya and IAD can keep them…) 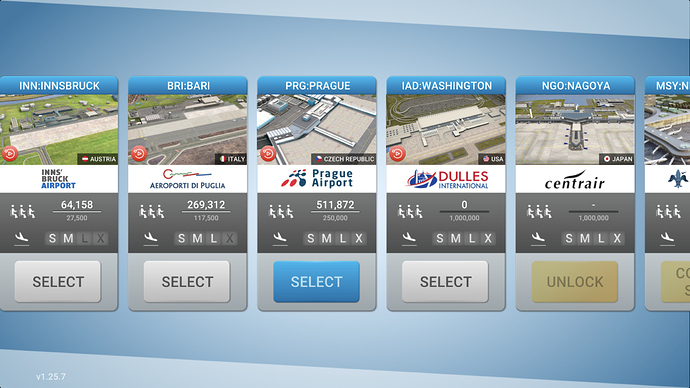 Muscat and New Orleans are not in game (and they will most probably have not less than IAD and NGO). It also looks like there will be another airport as next one (more details when time comes).

More features will come (noone promised everything will be available from the beginning) I guess.

The big issue here is that you are asking for something that doesn’t exist. Muscat and New Orleans haven’t been built by the developers yet, so you may have achieved the targets but as you can see from your listing they say coming soon rather than unlock. From current development timing the general consensus is at least 2-3 months before the first one of those is finished and then another 3 months before the other. They take huge amounts of coding time.
IAD and NGO aren’t everyone’s cup of tea and they are most definitely a challenge, but if you don’t want to play them then for now INN, BRI and PRG it is

Yes, I was aware that I was asking for something that didn’t exist yet. Isn’t that the whole idea of suggestions?

My PRG airport is getting rather large now, but the only slots I have to build on is a few M’s and a heck load of S. PRG is a major hub in Europe, connecting Eastern Europe to the Baltic countries in the north and also to the south (Hungary etc).

Over 55 airlines service PRG, and I have only seen a little handful in the game. It gets boring after a while seeing the same airlines come in (though I do love the latest additions of airBaltic, Japan Airlines etc).

And just another suggestion… I’d love it if RIX was added to the game!

That’s a massive jump to go from aiming for 250k pax to unlock a airport to 1 million. It doesn’t realistically make sense.

I understand the game is still ‘in development’ but seriously…

Plus money that can be transfered to any new airport via own planes sale for gold aircrafts that makes it easier to kick start next airport.

1kk in IAD is not really that much after all considering above + I think logic behind numbers is kind of correct.

Ah and PRG has couple L XL slots to be opened as well. Any airport do not have all airlines that fly to them in game because liveries are not created (since adding liveries only is not considered as super interesting developement of real content by devs).

Airports do not pop out of vizards hat like rabbits

Big ones need 3+ months to be created and have status “playable” then real stress test with thousands of players reveal new bugs and cycle is being repeated along with bug fixibg new liveries and most importantly game mechanic upgrades and changes.

Reaching 1 million pax at IAD doesn’t take long, if you want to reach it.

Eva, I think the 1 Million passengers is a subjective thing. I MUCH prefer playing INN that PRG as you can tell from the numbers below. 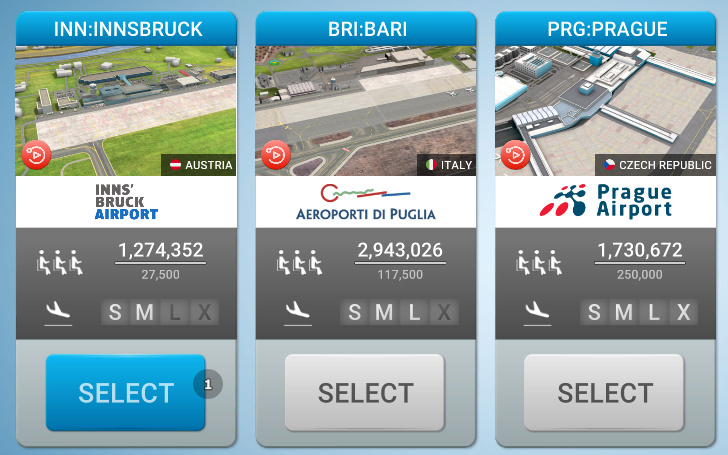 If you really don’t like IAD just build the X and L stands, as they hold more passengers per flight … and you should be able to work your way through the airport and on to NGO.

But there was also the option to unlock airports with golden planes. Or was that only on initial release?

I can’t check because all my airports are unlocked