As the title say: A nice update that like UATC, that will add emergency landing and rejected/aborted take off, would be a great addition.

Hi, I am a bit confused about the point of this post?

Although it does seem like a good idea, don’t forget that WoA is centered around aircraft handling, whilst UATC is an air traffic game - managing an airport. Emergency landings and rejected takeoffs are air traffic controlling challenges, while (in my opinion) the addition of this to the game will only slow your progress of what is an already tedious game for some people.

I think I’ve said this multiple times on this forum but:
multiple people have said they do not like the idea and even that they would leave the game if emergency landings were added, so this is highly likely to not come

Something I’d like to add to this is that the devs are considering something that is similar to this: medical support during handling phase as they called it. I don’t have much more info on this though

I for one love the idea as long as it can be done in a way that doesn’t hinder player/connection planes.

Count me as one of those. Plus the game uses real life airlines. Would not be popular.

I would agree with maintenance issues that delay departures etc. that would be fine, but emergencies are so rare.
The issue with it in UATC was it either happened way too often or not at all. It became pointless.

So yes, count me as against this one and I believe the devs are too for similar reasons

I think the idea is on randomness.

Real life, real airline scenarios could be actual flight delay data (held at the gate too long, flight crew goes out of work requirements, etc.)… but would definitely add to the complexity.

Randomness of future airport, aircraft, updates to each, contracting continues to make WoA a great long-term play. Thank you devs.

Well, I guess we have to accept it, thanks for the explanation.

I personally don’t support the idea, but if I was to add it I would make a separate game or a button to turn it on or off. I would hope that would keep people happy. Personally, if it was to have been added, it would have had to be in the games earlier days

I agree with departure delays, such as baggage not loading or some simple like that, but not an engine fire. It is to dramatic

Sinfe this seems like something that is frequently asked I’d like to send this. This is an answer from the devs during a q&a on discord. Please note that this screenshot is one year old and that plans might have changed. 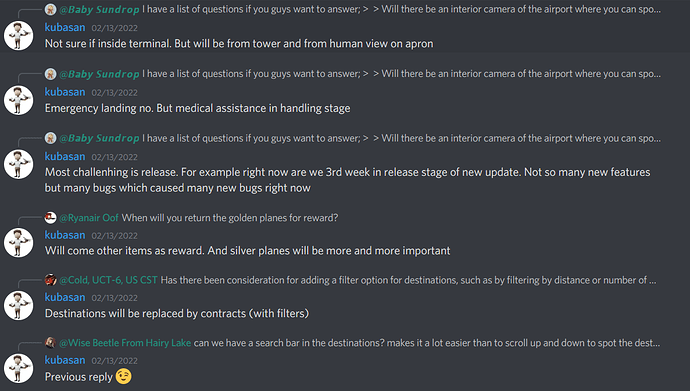