I am posting this on all possible WoA places (forum, discord, Facebook groops) because I am here to get votes for a player suggestion.

Look at this video and think about what irritates me?
Well, it are the many many plane cards in the bottom of the screen. I need to scroll way too much through useless ‘ready for departure’ cards.

Why do I have S and M stands full of planes ready to depart? This way, I only get L and XL to land on my aiport, which is a way more efficient way of using the runways.

I slightly prefer the first one, but I am happy with any sollution for my problem.

Therefore, I would like everybody to vote for this player suggestion (see photo) on the feedback portal:
https://www.worldofairports.com/feedback

Developers are ‘wasting’ time to make beautifull stuff while this easy fix is still not in place.

Thanks for voting! Bye!
Kris 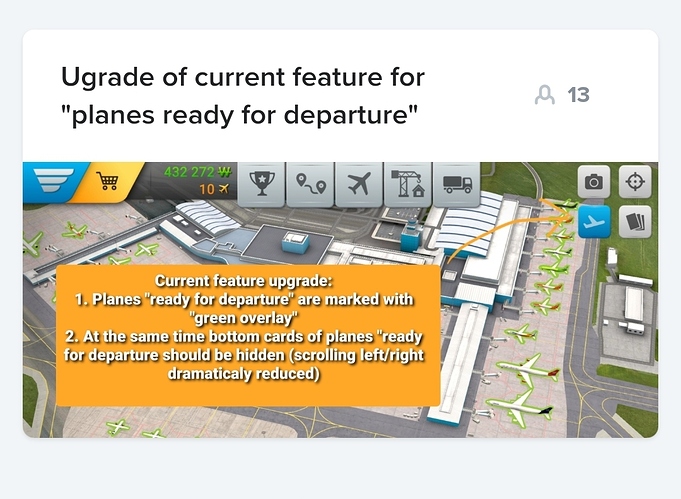 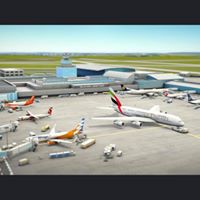 This group is for players of World of Airports, iOS and Android a like! (Please note: We’re are not linked to the WoA developers, we’re just fans and players who enjoy the game.)

Edit: I don’t blame developers, I blame people who vote for the wrong stuff haha

First of all, i understand your post and request.
I have made a simular request (see: Button for hiding planes which are ready for departure)

Second: The words you use here:

Developers are wasting time to make beautifull stuff while this easy fix is still not in place.

… i do not like. The developers are working their ass off for our enjoyment, with hardly any payment for it. (Hooray for the developers).

Third: Please let the developers spend some time on solving some bugs first.

Therefore, I am trying to get people votes😃

Sorry for if I sounded rude to developers, they are the best. (It’s community that votes retarded)

ok,… I’m against your wishes, I want that the airport feels more right, like a real life airport, just blocking everything what brings les money is not what i wish the developers should do.

I want that not every plane I deleted which is not at a gate when i restart the game.
I want that you can hide planes which don’t need any action of you.
and I want longer gate stands, that big airports doesn’t not feel that empty.