I am posting this lest the coming update gets released first & this becomes irrelevant.

There are some references under various titles on the Forum that in the forthcoming edition, the Wobblies would be gone, replaced by regular-looking passengers & ground crew. While I can appreciate that some players might not be too fond of the cartoonish characters, doing away with them would be most inadvisable (and inhumane) on these grounds:-

i. There are games (UATC, for instance) that for a very long time now have already had the most realistic-looking figures (Ever noticed that after some time they start looking like zombies?) So, the replacement (if actualized by WOA) would hardly qualify as a novelty. Indeed, it would only serve to reinforce the impression that WOA is once again playing catch-up! Unless, of course, the WOA variety are able to gesture, talk and sprint towards the departure Gate when they are late, lol!

ii. The Wobblies are one of a kind in the entire gaming universe (I would love to be challenged on that)! So unique, indeed, that I would recommend to the devs to have them copyrighted & trademarked ASAP;

iii. I, for one (and I am sure that there are hundreds, if not thousands more that) find these cartoonish people most amusing & loveable (talk about that marshalling munchkin at the head of a parking stand and the way he frantically flaps his arms towards the end, like a baby seagull attempting its first flight

)! Indeed, there has hardly been a game where I haven’t stopped in the middle simply to gaze, marvel & chuckle at them, not realizing that in the meantime ALL my flights have gone red! The Wobblies are my one big source of comfort & amusement when the grind is going particularly tough.

So, devs, if it’s not too late, please don’t vanquish the Wobblies! Create an option where players get the opportunity to choose from among the two.

These wobblies almost caused me to ignore this game, bacause of this exaggerated behaviour. It struck my as very childish.

Fortunately I immediately got caught by the game dynamics and deleted UATC from my tablet. I have played from day 1 and was not bothered again by these wobblies

I heard the same complaints from a lot of people so I can confirm you are not alone on this. I agree that the devs at the very least should give us an option to choose between the ‘Wobblies’ and realistic people. Another option I heard was to have the models change depending on the graphics settings e.g. ‘Pretty’ settings will have realistic models while ‘fast’ settings have the ‘wobblies’.

Glad to know that you are pro-choice!

Great to have your thoughts! Thanks! As for myself, Heavens forbid that I should ever lose MY sense of awe, wonder & bemusement, no matter how trivial (or “childish”, as you put it) the subject might be! My remark about the Wobblies as being artistic was basically meant for the devs, who clearly have an artistic & humorous side to them, and for players that can recognize an artistic & ICONIC creation when they see one. My only & recurring worry in this regard is that the devs will react only when it’s too late! (Hey, devs, take the hint, will ya? 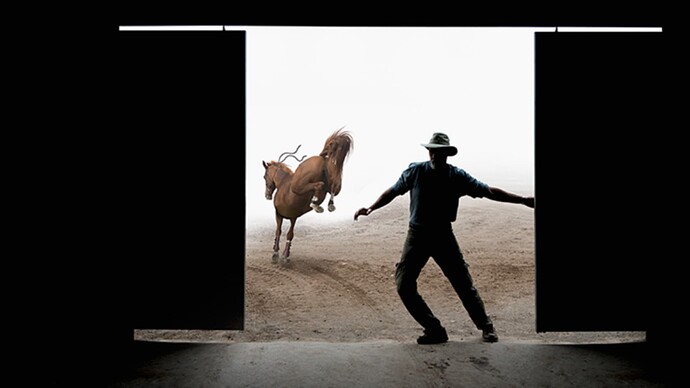 As for you deleting the UATC from your device…O - M - G! No, make that a double OMG! But then…ah…ok, no big deal! It’s only the law of the gaming jungle. A game that’s toasted one day, is roasted the next! I am betting all my money that you’d be deleting WOA faster than I can say OMG the moment another game with a bunch of novelties not seen so far, and with far, far fewer glitches & bugs than the WOA hits the market. Nothin’ personal on your part, just the law of the gaming jungle, lol!

UATC allready was destroying itself way before WOA came along. But with no alternative I played it occasionely.

I think it will be a while before I delete WOA. These devs actually listen to their players and do their best to make a great game with limited resources. That counts a lot in my decisions what to play.

Hey, Wobblyists! Today I was strolling about on the observation deck at Nagoya, taking in the spectacularly beautiful sights and chit-chatting with the Wobblies there when, guess, who came along! This dude 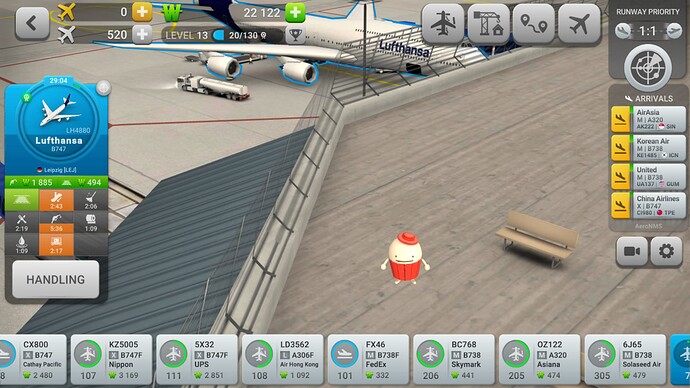 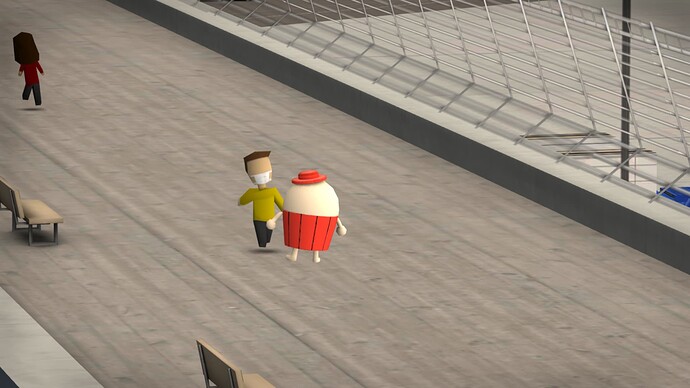 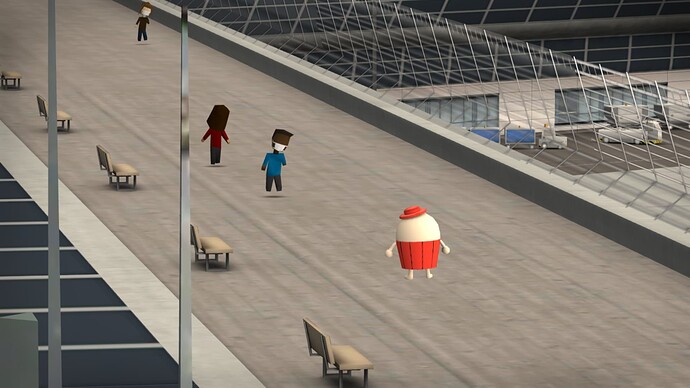 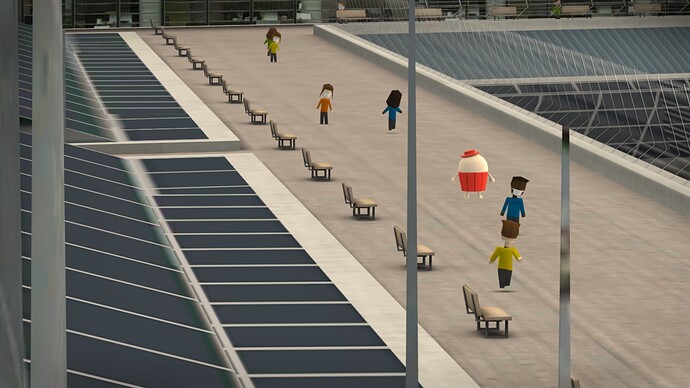 As you can clearly see, he isn’t one of the Wobblies, and not only because of his looks and dress! He didn’t even walk like them (going hoppity-skippity first on one leg & then on the other)! And notice as to how he doesn’t even cast a shadow! Is that SPOOKY or what? But he clearly seemed to know his way around, and the sightseers appeared to be pretty familiar with him and appeared to ignore him - much to my alarm! Does anyone know who this cupcake-like guy is? And is this a sign of the future, that in addition to the Wobblies we are going to have Mr Cupcakes as regular folks on the WOA? If so, I am packing and leaving by the next flight out!

That cupcake person is an easter egg in the game on purpose.

That cupcake person is an easter egg

Yeah, at two other airports (INN and PRG) these ‘easter eggs’ give you 50 Wollars when you click it. (If any one doesn’t know about it)

Was my 1st ever Easter Egg Encounter! Lol! And for first-timers, boy, they sure up the anxiety level, what with the Wobblies also in the mix! Thanks for the info!

Sheesh! That Egg surely gave me a moment of panic, not knowing what other bizarre life forms might also be on their way up the observation deck! Why can’t the devs place a small icon somewhere on the screen - or under a link - that let’s a player know about such rewards? I am aware that a number of players are already pretty uncomfortable with the bizarre ways of the Wobblies, and to the newbies among them the sudden appearance of such characters can be even more unsettling (I’ve been playing PRG for ages as I’ve HQd my airline there. Funny, though, that this dude never ever showed up there!) Anyway, sorry that I raised a storm over just an egg, and thanks for the info!

Yeah, no probs but I wasn’t exactly specific about the ‘easter egg’. Mr Fu, as this person is called, is the one for NGO. There is a helicopter at INN, and a DC3 (I think) at the old PRG airport at PRG.

Got it. Gracias. Though still can’t get over the embarrassment that I created such a fuss over, of all things, an egg, one that isn’t even going to

Do you mean that this sprite shows up at INN and PRG, or are you talking about the EC135 at INN and the DC-3 at PRG? Don’t forget the F-14 at SAN!

Count me as one who likes the Wobblies. They actually make the graphics seem better, because they avoid the uncanny valley effect so your brain discouraged from scrutinizing the realism of the graphics.

How could I forget!? I knew I was missing something…

Going by your experience, how many days, weeks or months does one have to play at the select airports as to receive the goodies? I mean, it’s not the miserable 50 Wollars that I am after but for the spectacle of seeing these oddities arrive (I freaked out over an egg - can you imagine, an egg - so I don’t know as to how I would respond if a bizarre-looking plane or heli were to suddenly appear out of nowhere)! And like I said before, I played PRG for months on end but never received the DC3! Any idea as to where my DC3 might possibly be?

It’s just after 5 RL minutes and you’re able to start the helicopter in INN, the DC-3 in PRG and the F-14 in SAN. I’m not sure about the guy in NGO, it’s one of my least played airports.