Some bugs i noticed in INN

Only these bugs until now i found. Tomorrow i’ll upload photos with the bugs because right now im writing from my phone.

Thanks CptGreek, in fact 1-2 are game mechanics not a bug - it is just like that.

no.3 we have to check if that was implemented at all - i dont think so but i agree we should have 2whites and 2reds when plane is landing

Thank you for the fast reply @shill but my opinion is if you want to simulate in some way the reality then i think tou need to change some things in the future to make it better.

Im not saying that the game isnt very good but i think you know what im saying!!! Best regards and keep going the FANTASTIC work!!!

I feel you man i know what you meen. So the game stays as a game and doesn’t simulate the real airport handlings and aircraft’s movements!!??

Not saying there wont be any changes and improvements - but be prepared its not “100% accurate simulator” however it is as close as possible in many respects.

I kinda find that weird too. And I think it is inconsistent aswell.
To illuistrate what i mean, look at the following screenshot:
It is possible that multiple planes taxi to their stand without waiting before terminal area. 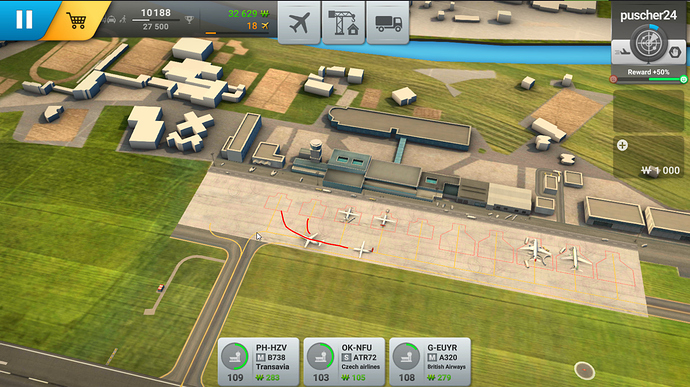 But it is not possible to have P/B from stands far down left while plane wants to taxi to stands on the right?
Personally I think that it should be possible to simultaneously taxi to stands and do pushbacks as long as aircrafts don’t get in each other ways.

And: When doing starts or landings why are planes held for so long an the taxi to runway? They can go to their start position once the aircraft currently starting or landing is beyond their point of entering the runway. That would make ground handling of planes way faster.

Above screen shows actual bug that happens from time to time considering current mechanic of the game.

Seems weird cause it happens to me all the time whenever 2 planes are close together?
Screenshot of the other idea regarding faster ground handling: 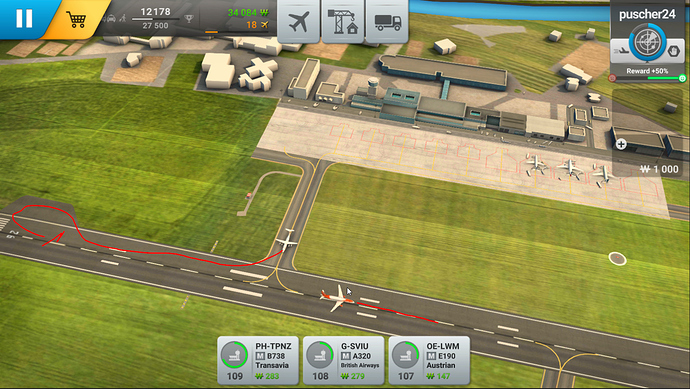