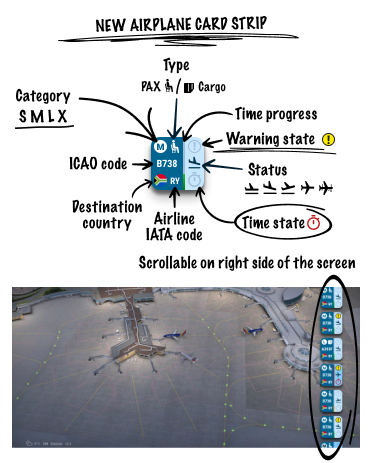 Is that B738 supposed to be a filler for the ICAO code or is it the ‘aircraft type’?

I’ve just one tiny issue with this model of the card. The symbol for a pax flight, a seated person, gives the impression of an invalid, or an elderly person, or a worn-out passenger, which I find not only distressing but also not in line with the energetic character of this game & its non-stop development. Would you agree with this interpretation? If so, would you have this card slightly modified as to have this symbol be replaced with a standing figure?

a seated person, gives the impression of an invalid,

To be fair, people do sit when flying on planes…

When will this update be released

The issue as to “When will it be released?” is already being extensively discussed on the thread titled “SXM Pre-Release Discussion” under the head “General Discussion”. So that the exchange on the Forum remains organized, tidy & easily traceable, it is incumbent on all that the rules of the Forum be strictly abided by & that specific thread be utilized for the purpose it was created.

It also used to be for their anniversary on October 22nd.