Will be the earnings for flight ever adjusted?

My question is, if the earning (profit; revenue as who wants) for long haul flight will get adjusted. If it will come at least little back as it was. I am not asking for changing it back in total as it was. But at least a little. In my opinion the X planes now with long haul destinations make no sense.

I agree, it does not pay to send planes to distant places, it pays to fly only within each continent, I even understand that the gains have decreased to make an improvement in purchases with real money, but it is very difficult to collect money and gold plane example was with my L and X planes in maintenance class C, when I turned to D I had to spend 123 thousand on each A380 and unfortunately the bills do not beat the flight that is giving more profit today is at most 19 thousand. My opinion either increases the gains a little or decreases the values ​​of Maintenance.

Im currently working on an analysis of all of the routes through to before maintenance D, and it’s very telling.
I have some theories as to why things have been done this way, but I don’t know if they mirror what’s going on at Haughland central.

I really hope there will be some adjustments coming. I liked to send my planes to other playable airports but you basically cannot do it anymore with L and X planes without losing money or with a tiny revenue only.
I don’t know if there is a plan behind but especially the revenues of IAD-NGO are a very bad joke… On the other side you earn a lot per nm on IAD to EWR with a L plane

for me it is not really fun how it is right now.

But don’t get me wrong. It is good that we are not earning these big revenues anymore, but we should still be able to make a good revenue with flying long haul flights and especially with flights to other playable airports. Right now I would not recommend any new player to unlock L or X planes at all. It is not worth it.

it is even worth having L or X planes, an example I did today if I send an L plane from IAD to MIA I will spend 3906nm round trip considering that the first maintenance of the L plane is with 49000nm I can carry out approximately 13 flights with a gain of 5700 +/- Now if I send an IAD flight to GIG I spend 8900nm more or less 49000nm I can make only 6 flights until the first maintenance, in short, if I send IAD flights to MIA I will have a profit of 23,101.00 in relation to the IAD flight for GIG
that’s why it pays off to make short flights within the continent itself than to send them to other continents.

But what will u do with 50 X and 25 L planes in IAD, when after update u need to go for maintenance with 50 of them. Lot of money for service (which u do not have right now) and then u do not have enough short distance to send to earn money? What u wil be sending them for 16 hour flight? And with low earning? Makes no sense.

From the update of revenue change, I have not played IAD. Planes standing on the ground.

The only option is to sell all the planes that need service.

it is even worth having L or X planes, an example I did today if I send an L plane from IAD to MIA I will spend 3906nm round trip considering that the first maintenance of the L plane is with 49000nm I can carry out approximately 13 flights with a gain of 5700 +/

Yeah, but that is what I mean. Washington to Miami or New York are the best routes for L or X planes. I don’t like that idea at all. Where is the realism? Why do you get so much more on short flights than on long haul? Same with M planes from San Diego. San Diego to Las Vegas gives almost the same revenue than Seatle or Washington, but the flight is much shorter.

So, it really gets in the way of having many planes already in use, you are right, but I gave an idea some time ago to put in remote areas airports, where planes usually spend the night to fly on other days, they should create remote areas and even spaces for us to leave our aircraft when we are not going to use them, we will see if when they put up their own maintenance hangars you will have this option of not using them to guard our planes.

yes, i agree with you lost realism, i think you should put at least more profitable places on the most popular routes in the world like Paris, Dubai, Rio de Janeiro, the hottest destinations in the world, once a week put better gains on each route I know it, the way it pays off to have few planes.

Yes agree! And playable airports should be more profitable as well. With the waiting time plus the handling time on the other airports the planes are gone for so long and from the profit of these routes you can only pay the maintenance fees when you are lucky right now.

It would be really cool to hear devs plans on this so that we can manage our fleets. If it stays like this connections and long haul don’t make sense and I will sell my fleet, if there will be adaptions I can keep it.

I used to play this game a lot but it seems to me, that the changes are made to get us to pay for gold airplanes. When you sell airplanes you can’t get golden airplanes.

In truth removing the whole golden planes for money when selling aircraft was a good thing cause boy was the Saab abused then (it still is) and they technically don’t make any money off of the game (as mentioned in previous posts) but yeah it is kind of a bummer that they removed it.

If you do the conversion, I built up $200 worth of GP, without spending a dime, how can that be right?

I have spent a reasonable amount of money on the game, maybe not quite $200, but fairly close I think, but still, if the old system were allowed to continue, we simply would not have a game.

Also, no ads! This is unique, so devs need to make money somehow… the earning have to be adjusted a bit, definitely, but as painful as the change is, it was necessary for the future

I’m also very disappointed with what he started doing with the game Haugland recently … Added a lot of content, the updates are great but the fact that they want to get more money out of the game is very readable … Personally, I think a lot people are disappointed and I hope that they will adjust the bonuses even more, because for new players the game is unplayable in this form … I have 3x A380 and two smaller planes but I also don’t believe that I will make any profit from those planes

Firstly welcome, and I don;t think it’s a he but yes completely agree to the whole fact that they may have gone a tiny bit overboard in the revenue department and yes you don’t have to “believe” it “won’t” make a profit since a380’s bring about a few 10,000 every flight and those flights take up almost all the nm’s and maintenance is over 100k so your best bet now is the Saab and even if you want a profit from the Saab you require to be constantly on the game 24/7 I mean i just have to say We’re people and we do other stuff and more other stuff and having to grind on one game is never fun. Not saying the devs don’t car or anything but still yeah. (sorry if this is way too long and goes off on to my own opinion from a response to your opinion.)

I’m going to repeat what I’ve said many times, even in this thread.

3a Haughland still need to make money to afford all the costs involved in making such a game, that wasn’t going to happen under the old set up. Plus the economics were off, a 380 cost 445,000, devs have said that they divide by 1,000 from the real pricing. So a 380 list price is 445m, but you were getting 70m from a single round trip. Just not reality.

3b. The problem is still in the maintenance costs, even with them being halved the bigger ones are still too expensive. A 380 (if it carried 853 passengers, which the WOA ones do) would absolutely print money. Not in the game, so to me that’s what needs to be changed. But then I’m not a developer or an aircraft cost expert, just a common garden accountant.

I’m far from saying I’m happy with the current situation, but I’ve adjusted for now with the hope of future adjustments. But there are mitigating reasons for why it was done.

I completely agree that the devs need to make money somehow but maybe they’ve gone that tiny bit overboard with money nerfing. profit-wise it doesn’t make sense to have some routes give absolutely no profit and some literally all the profit you can have in this world all the routes should make a decent amount of money (not all necessarily making a profit) since the most profitable ones are the shortest ones even though people pay more for long/stop-over flights. That whole fact of short=good long=bad make the game way too grindy and that’s the problem, the grind in a limited time before the entire level resets.

Earnings are not going to be adjusted 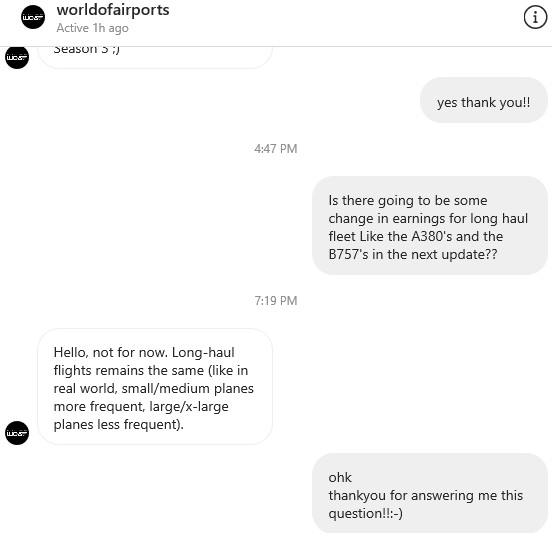 looking at the answer chances are it’ll probably change somewhere 2021-2022 because it’s really not allowing newer players to enjoy the game.