Aircraft tasks time out, wont go green or switch to next task

Aircraft constantly time out. The tasks won’t go green or prompt next scheduled task, eg, cleaning after disembarking etc. Only just started on bari but becoming unplayable. Have to constantly go back to main menu n back into the game. Also aircraft freeze after pushing back. No reason, just remain stationary on taxiway

Closed the app. Relaunched, exact the same. Nothing working. Issue was there, but it wasnt every single aircraft before the update like it is now

Im finding the same since the update most aircraft are timing out at the point of take off or not even turning around even though selected appliances to do so. Having to shut down and restarting evrytime and getting frustrating now!!

I’ve also noticed aircraft are becoming stuck on stand when they are ready to pushback as well has become more common after the update.

I have same problem since recent upgrade to v1.30.5. Loading sequence gets stuck, aircraft times out and hence does not taxi away from stand. Worked fine before upgrade. Android Galaxy Tablet
Thanks

The issue occur only for Small plane. The count down continue but the actions (escalator, fuel refill, luggage service) stay stuck. At the end of the countdown, we cannot release the airplane. 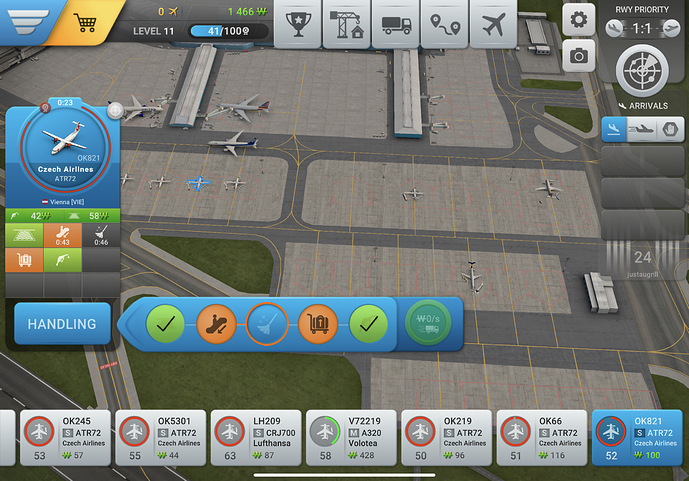 I think it happens if a task gets completed (for instance fuelling) while the user is playing a mini game (landing or parking a plane).

I’m playing Washington airport and it only has happened to me with small airplanes.

No, I think that is a bug. @Justaugrill Can you tell me if you were playing a mini game at that time?

I dont play minigames. And me IT happen too. IT are only small Planes and i believe in different handeling stages IT go stuck

It happened to me when I was scrolling thru the destinations. So the observation that this happens only with activities other than handling planes comes to mind.

Correction! It just happens during any time-out.

Hey @Rito, no I turned off mini games.

To fix for a time the issue I must return to the main menu and go back to my airport. From there, the countdown for the service for the Small planes start again. The consequences are the planes were taking off (on the taxi way) disappears.

That means if you give a bus and when it stucks, then you have to go to the main menu and join again to give a cleaning truck. That is really annoying because planes trying to land cannot land.

Exactly, you got it!

I get the same issue, sometimes it’s my planes sometimes it’s other planes. I think you are right @Justaugrill, it’s only small planes that are affected.

by a virus from which planes can’t work?

I can’t wait for a quick fix! I really love this game!!

yeah I do experience the same, at the moment only with small planes though. usually after finishing boarding they get stuck and you can’t get them to depart but the clock keeps running. very frustrating, ruining the game actually

I got the bug too.