How are you getting a full airport?

I am having the same issue at every airport, of the runway time being so slow that my airport is always mostly empty. I keep seeing pictures of other people’s games with full looking airports - what am I doing wrong. It seems like a fundamental problem with game speed, that the service time for planes is not consistent to the amount of time it takes both for planes to land and clear the runway and to taxi.

It seems like this game is going for some degree of realism? If so, the time planes take on the runways needs some serious speeding up. Otherwise, what is the point of even having a big airport?

For me, this is an issue that I can already tell is going to lead to boredom and eventually quitting the game. All of this work has gone into the graphics of these large airports, and it is work to grow them, but ultimately, you can’t enjoy the size of the airport or your work, because the ability of the airport to be busy is so extremely limited by taxi time. I have, consistently something like 25 planes waiting to land at IAD and never more than a few actually at the plane stands.

Send this as a private message to the developers
on Instagram or facebook
They would give a good answer to this one.

that’s a thing that is bothering me from the early stages of this game and devs don’t seem to care about.

only way to get full stands is having a big fleet of own aircraft and block their departure, but that’s boring, too.

This issue has bothered me too. Is the answer to not boost the efficiency of your handling services? Does that help to fill up an airport?

no that also does not help much

In my opinion the problem isn’t the runway but the taxiway. When a X-plane lands in PRG for example the plane needs almost all the day to get to the stand. Even speeding the arrival doesn’t help there, because the taxiway is still the same.
The full airports you see are mostly from players with an own fleet that still kept in their stands.

@Blackwater1072 The problem with not upgrading equipment is that you get penalized for taking too long.

It might fill it up, but it would just change where the limit is, as the problem is still the rate of landing and takeoff

At IAD, at least, (that’s the one I’ve played the most since the grind is obnoxiously long to open the next airport), it’s definitely a runway problem. Planes don’t come in fast enough for the number of stands, and likewise, if they were coming in faster, they don’t take off fast enough to get out of the way. So, you just run a mostly empty airport most of the time.

At PRG, I still wasn’t getting enough planes in to have any fun, and the takeoffs would be hopelessly backed up too.

The best thing is to first clear the queue. Buy some of your own planes and then restart the queue and operate the airport slowly. I also had the same problem but I fixed it by myself by having my own planes stuck in the landing queue so that no other planes can land. (make sure you have the same amount of planes or more from the landing queue slots as they can stay unlimited time)

My point is not about filling up the airport by any means necessary. Keeping planes sitting on the ground can hardly be a positive thing. I guess that does answer my question as to how airports get full, so thank you, it’s a pretty poor game mechanic though, that that is what it takes to do it.

I understood it, I want the devs to increase taxing time by 5-10 % so that planes come faster.

If I remember well they have increased it on PRG already.

They need to double or triple or quadruple what they did then.

Can you imagine how fast the planes would have to taxi from RWY to STAND? It would be unrealistic. The only way how to make airport more crowded is to prolong the time which planes spend on stand. I do not think this will happen anytime.

Definitely don’t want them on stand any longer, I can’t turn them around quick enough now. If it wasn’t for the accelerate button I don’t think I’d accept A380s & B74Fs at all.

I think that this will help some. 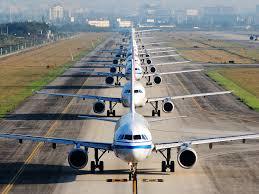 Possibility to upgrade tower to improve lineup procedures. Based on tower upgrade level can skilled controllers speed up process of runway lineup and release. This will improve runway / airport max throughput.

That will just deduct 1 plane. 1 plane only line up’s at a time.

I don’t know what the in game speed is but I do know that it can be increased maximum to 40 knots if the devs are counting that way.

I have 31 planes queued to land at IAD (on the bottom of the screen) with an additional 20 gates open.

I owned about 100 M (E-190, A319, Comet) which rotate through, and a few times a week will fly them all and bring in non-owned flights. Even at full pace, I can only seem to keep about 30 planes on gates at a time by the time the landing queue gets backed up.

It seems to me that even at IAD, the two runways are run on the same logic as one runway rather than independently. Since so many gates are M, there is not taxiway contention. And, I have all services and all are “maxed” out.

I can max out the gates at INN, BRI and SAN. PRG, NGO and IAD not so much.

To each of the points above, I agree, and say… “Live and let play.”