To your first point, if the devs wanted to keep a cool element of realism recently added, they could shorten the landing distance as mentioned, but increase them for rain and snow.

Great suggestions. I hope the devs read your note.

Ive sent the link to them to check out

@carlsberg72 … man, you get better every day!

Shhhhh, nobody’s supposed to know that

I discussed this earlier but we could always renew it.

Also, any aircraft parked at a jetway should not require stair trucks since they have the jetway.

Pondering on the idea mentioned above. Everytime a aircraft lands, it looks like this.

And once it reduces speed to taxi speed, the symbol changes, that point can be used for lining up a take off or scheduling next landing, as by the time next aircraft start takeoff/touches the runway, that aircraft would have already cleared the runway. 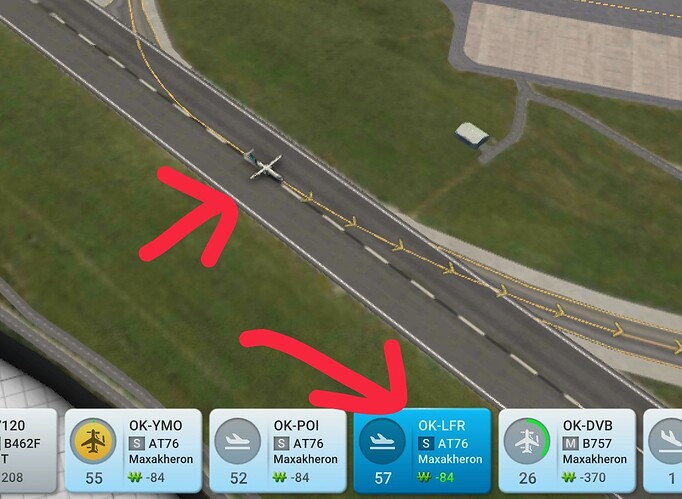 I understand Heavys in real life require some space behind them. But that can be programmed differently between S, M, L, X. It’s an idea.

About the jetbridge/fuel truck:
It’ fine by me to “use” a stairs truck, while at the gate. It’s the equivalent to have another button to use the jetway. So, what changes? You press a button. L and X planes don’t use baggage trucks but cargo trucks. So? It’s one button versus another button.

BTW, I don’t get the “realism” argument. It’s a mobile game where the turnaround time for an L plane is 12 minutes and the day lasts 30 minutes. Everything here works in order to have better gameplay and have fun.

The current level of realism is very good. You have real world airports, planes, liveries and destinations and eye candy all the time. I find myself looking at the runway view in NGO or Tower 2 in IAD and looking at the planes taxiing and I just sit there (i don’t care about the WW).

The suggestions of the OP are very good, I agree with most of them. I don’t get the “two runways for arrivals”, though, because then you’d have two rwys for departures also, and an extra button to choose the runway. But I’d be willing to try it.

The CRJ does not use stairs, but it uses buses. So, the service here are the buses (as with the other aircaft).

I like the suggestion “refueling should be faster at the gate if you use Hydrant”. Different button, same function, faster service.

the idea of not using a stair truck at a jet bridge means you don’t have to buy a stair truck. it’s a cost savings. so yes, you still have to push the button, but it saves you a lot of money that can be spent on other things.

As for realism, I almost added another point to my suggestions that the turnaround time for these aircraft should be MUCH longer, but like you said, it’s a game. The suggestions are less about the realism, and more improving runway utilization so you don’t have 20 or 30 aircraft waiting to land at all times.

CRJ and other small aircraft will only use a bus if parked remote (Away from the terminal). Otherwise, passengers will usually walk from aircraft to a door in the terminal. no bus or stair truck needed. Again, you’ll still have to click the “Disembark passenger / Board passenger” buttons, but you don’t have to drop WW2,000 on a stair truck.

I can agree with point 4
Is just a mess in IAD if you have a lot S and M open gates.

People need to stop regarding their own opinion as universal truth. I like my IAD with only L and X planes. I can’t understand why anyone would have many S and M. But that’s just me.

I like the user-triggered take off. If an “auto departure” function is introduced, then say goodbye to bulk game, a super useful technique for most of the airports.

People need to stop regarding their own opinion as universal truth. I like my IAD with only L and X planes. I can’t understand why anyone would have many S and M. But that’s just me.

and here we come to personal feelings

From the economic point of view you need those S&M-planes to grind money and goldies, from my personal point of view I’d like to have a nice mix of planes coming in and getting served.

I like to mostly watch the majestic planes come and go. Small planes are nuisance for me. I don’t do grinding. I am happy that this game gives many options for everyone to have fun.

If I had to suggest something, that would be faster taxi time for PRG (the taxi path depending on gate is excellent, BTW) and some filtering for the destinations list.

I believe having departure/arrival runway options would be nice. It got so busy at my IAD that there was a huge traffic jam. Also, we should have real world timing (another option) to have a slower game. Another idea is to have peak busy times. Going to use MEM as an example there are 2 peaks in a day (thanks Fedex) 110 planes land during the day and 150 at night almost all of them 90 seconds apart (yes I timed it).
Seperate idea; have terminals that are owned by companies - Delta, Armerican, Emirates, etc and have optional for other airlines - same for cargo gates. Companies compete for gate space amd all.

No, current game play is nice and can accommodate for more people