We should be getting planes from non-existent routes as well. They did it for all airports. Once that should come for sure are the ones from playable airports like the Lufthansa A343 from LEJ or the American 747s/Aviation Daily A388s from IAD/SAN

could send charter flights in high season, for example, to compensate for stands L and X

Form playable airports yes. From nonplayable will be only routes that are existing in real life. This rule is valid from Muscat. When contracts will come you will be able to invite every airline to your airport

I though I read that correct, I was under the impression of they can come as long as it is within reason

Ok so I what I understand from it
Any aircraft/airline can come as long as it is within reason as requested by the player, who will have to pay a fee for said airline to get the incentive to arrive

Can you ask the devs to provide some explanations about the new features (Contracts, Changing base of airplanes, Maintenance) in the next release(s)? How does it work, examples of application, tips, etc. We then spend less time figuring things out and get “into it” more quickly.

If it is a resource problem I can help with writing this documentation.

Good idea. I will try to get all needed info and make posts on Facebook and here on forum.

I plan on making videos shortly after the release going over the new features in 2.0 (on Phat Airlines in YouTube)

Great, that will help too.

I got some info about changing airport. It will be very easy. Simply you will be able to send your planes to one of your airports as to normal destination. There you will be able to change its registration number in order to let them belong to new airport for a fee. And that will be it

I suppose it will happen in real time as normal flights.

Maitanance is not ready yet. Still are some points that need clarification.

So does it work with all planes? Because sending it to airports like ‘normal’ means I can’t send any S/M planes between let’s say MCT and LEJ. Also were will I pay the fee? At the old base or the new one?

Also were will I pay the fee? At the old base or the new one?

What about the Contracts? Have you received information about that?

When flight is avaiable I think. You will not send S plane to IAD from Prague. If I understood well fee will be paid on final airport.

Contracts No. All team is 100% involved in progressing work with SXM and airline manager. Its very big project for them.
I will be trying to get know anything.

Some news about contracts:

Me: If I am uderstanding well info on portal some Airlines will propose contract to current airport (so it will be for free). But if player will want to have on his airport airline that doenst propose contract he will have to make money proposal. Am I right?

Devs: Yes. These proposals will develop in time - based on playing and based on players airport rating (increase with handling on time). Some airlines will not propose contracts without “marketing incentive”. If contract will be fulfilled successfully then will be offered prolongation.

Me: Free contracts will be ofered by Airlines that are flying to airport in reality, right? But with exact incentive proposal players will be able to invite every airline that has appriopriate planes to reach this airport?

Devs: Yes. Exactly. Porfolio of free offers will be limited by airport rating.

Maybe an incentive scheme can be introduced for “loyal” (connection) players under contract. For example an increase in earnings every quarter? Or a “frequent flyer program” for contract connections where earnings rise per fixed flown miles.

This encourage connections for longer durations.

New model of aircraft is ready

SXM is getting closer 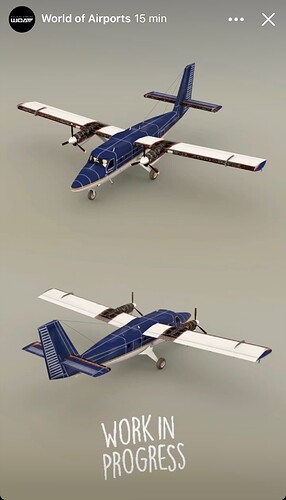