Which airport would probably be added after Muscat?

Since Muscat is coming in the next update, I have a question for everyone. Which airport will probably be next?

General direction of the devs is to ultimately have one airport on all the continents. They did 3 Euro ones first because of their relationship with PRG and it was the easiest way to introduce connections in the early development of the game.
Once they added IAD, SAN was a good foil for a domestic connection, so right now NGO is the outlier.

MCT is taking the middle east part of the world, my expectations for the next 3 are probably. GRU, SYD and JNB to cover the remaining major continents.

After that, I could see another European one. WAW is very popular due to the number of Polish players of the game. and maybe another one in Asia to help connections with NGO.

The same would then go for GRU and JNB (or whichever ones they select, no guarantee those would be it). so there can be a blend all the way around.

The airports themselves could change, but I know the direction is what is generally planned.

A well known UATC youtuber (aka. Idiot who keeps re-uploading his videos again and again.) made comparision video between WOA and UATC, I’ve noticed that Muscat ans Orlando were added as COMING SOON airports instead of SAN, so my guess could be Orlando. Although we might get one of the top 5 suggested airports.

Do you mean New Orleans? That was planned but seems to have been replaced with SAN.

Dallas or Sydney. I would love to see an airport with more than two runways such as ATL or LAX.

And want to crash your phone?

No seriously, these airports are bigger than the IAD and it will take two or three times longer And also, think about all of the items/blocks or whatever is it, too many causes phones to break badly.

My iPad crashes now with the current version.

That is why they should focus on rather smaller intl. airports but of course, they could add Atlanta one day.

Dallas wouldn’t be added as there are 2 airports in the US. Probably Singapore/Sydney or Rio de Janero.

Or Johannesburg, Moscow(SVO) or Anchorage

Should be Sydney finally
Muscat was not necessary.

Muscat was in the original roadmap. So it was always planned. MSY was too, but effectively SAN replaced it (for now). So it was necessary to connect the dots between the European airports and Asia.

After this, it’s a toss up between GRU for South America or SYD for Australia, which ever one comes next, the other will follow after. Devs really want an airport on every continent or major part of the world. MCT is a step in that direction and has 2 runways

My other theory is. Once those two are done. The next would likely be Africa with JNB or something like that.

Could GRU be changed to SCL or GIG for example, sure, but the plan is being played out right now as expected.

While I have a feeling it will be a smaller Airport, I would hope that we will get a large airport such as ORD, JFK, LAX, ATL, LHR, HKG, or ICN.

Has anyone seen the prototype sketches of MCT to know whether it will have one or two runways in game play? PRG has multiple, but we’re playing with one.

I have it under good authority it will be 2 runways but will only use the new terminal for game play. Plus it says 2 runways on the feedback item.

PRG never uses both runways at the same time for safety reasons and as the devs work very closely with PRG they actually follow their lead on that airport, one of the reasons why PRG was next in line after INN to get the 3D model treatment and the new fuel station over by the 24-31 gates.

We may get to use the old terminal down the road but that is not planned for release initially.

Just been scrolling through some IG comments on the MCT post, and came across this one. 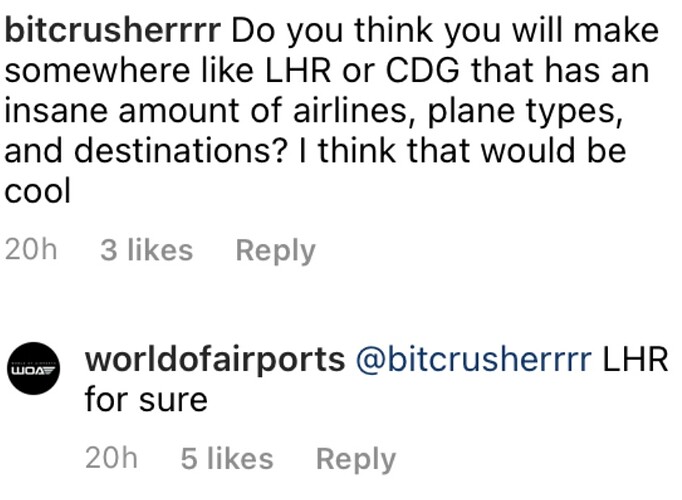