I built L gates in BRI and I used to get over 2000W for a United B777 visit from SAN. Noticed that as game progresses and airport improved, this reduced to around 1980W. Now I see that sometimes this is even lesser. Isn’t it that for a specific plane type, between same airports, in this case, same airline, the W earning remains the same? If not, what drives this?

Earning from generic plane is random value. It’s like they have minimal amount and maximum, depend from airplane type, destination etc. Plus there is few interesting thing’s. For example for me was funny to see than generic A332 give me more money, than generic B777. Another interesting thing’s generic cargo plane B777F give more money than B747F, some times A332F give decant amount of money.
For same type plane, B757 from some destination give you like max 500W-550W, from some other’s like 700W-750W. Sometimes A319 give more than B738/A320.
So it’s clearly random.
but you can to test some destination and see how much plane give you, and left only those who give max income.

It’s interesting to read this as I’ve noticed something very similar.

Of all the airport’s available, my fave is MCT.
I’ve managed to open up almost all the gates (I need) and have a steady flow of airlines and players flying in.

Now that my airport is almost complete and I now run my own growing airline the revenue has plummeted.

I run a small fleet of Bae146s and on a short hop they earn over 1000W, more than most of the L Oman Air Airbuses coming into my airport.

Another anomaly, despite the purchase price difference, my (sole) 777 doesn’t earn anyway near the revenue of my 787 on the same route despite the extra seats and cost.

My 757s earn only slightly more than my A320s. Again, despite the price diff and extra seats.

There has definitely been a lowering of revenue from handled flights IMO as it now takes me far longer to purchase an L A/C with a run full capacity airport than it did at the start.

I don’t really care as this is the best game out there, just interesting to see someone else noticed

So, it seems more like random if not some unforeseen pattern. I also noticed that incoming player planes normally give me less than incoming generic planes. Of course, I get more from sending out my own fleet.

Another anomaly, despite the purchase price difference, my (sole) 777 doesn’t earn anyway near the revenue of my 787 on the same route despite the extra seats and cost.

It’s interesting you say that. I was planning to buy some 787 and earn enough to progress to 777. Seems like I am probably better off just sticking to 787 from earnings perspective.

Recently, a lot of aircraft Thad their fuel values and revenue altered. The 777 fell victim to this. Considering it’s based of a 777-300ER (B77W), it’s range is no where near it’s real range and thus it’s fuel is really high, despite its short range. Originally it was the complete opposite where even some of the longest flights would not all the fuel, now a MCT - NGO flight is nearly out of range.

It’s come to a point where the A300 (the smallest PAX L aircraft) earns more than some of the bigger ones!

Wow. I am actually surprised you liked my comment, Andy (is that how I am supposed to call you?). I know I am late.

because you nailed it. It’s all about balancing. I’m not saying the devs have it right, but knowing what they were trying to achieve, they do that by balancing the revenues between the aircraft models and levels.

And you can call me Andy or Carlsberg (my username!), all good.

It’s all about balancing bro…

With the last update consumption has changed. Newly included are AB6 and SSC, missing are A346 and the A330-RR-Variants 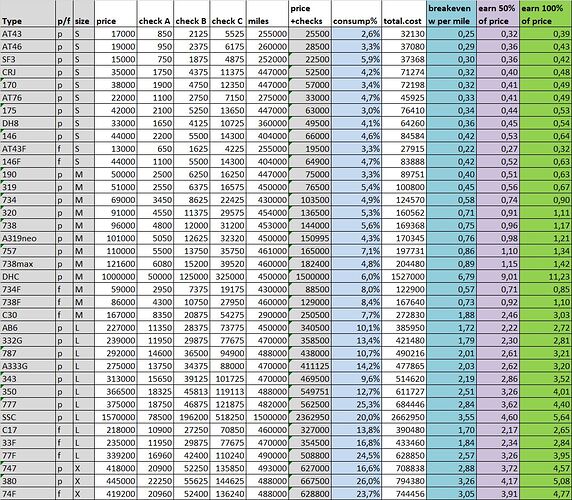 Posting the explanation from your original post will help to understand what this is about.

Update is out now General discussion

Fortsetzung der Diskussion von Update is out now: Hello! Updated the revenue calculation: How to use this chart: Calculation ist for selling just before check D example for B757: if you fly routes where the distance divided by the revenue is >= 0.87 than you make a breakeven in the end (and get 2 gold) - [blue column] If you fly routes where the factor is = 1.35 the total revenue at the end will be the price you paid for the B757 [green column] [woa]

As a math point, from IAD (with a couple of exceptions) 380 will make money on a route over its life up to around 5,100 NM (TLV). If you factor in the 4 GP as cash towards a new purchase, that can rise up to 6,000 (ICN), although using speed up options hurts that of course.

Eh, this table become outdated, due economic change in 1.5.1, most of planes decrease their income like 2,5% - 10%, depend per plane… It was increased fuel cost and decrease income from destination.

Is updated now. Still missing are the RR-A33x-Variants: 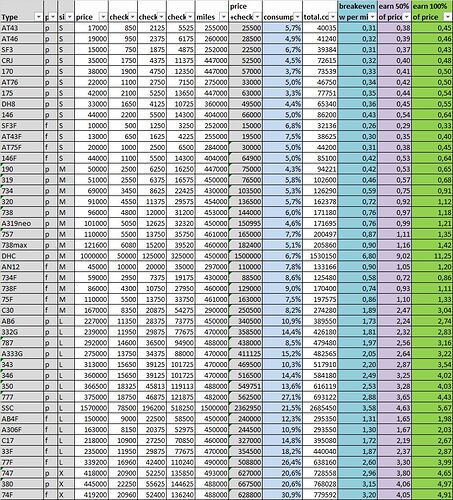 Based on speed etc. all the 330 models are the same so the fuelling requirements should also be the same.

Thank you for putting this together.

Thank you and @horsepowergeek for this information