With the developers recently announcing Silver Planes on the feedback portal, it’s got me wondering what will happen to our current gold planes and will the price of aircraft remain the same (ie same price in silver planes as they are gold planes). 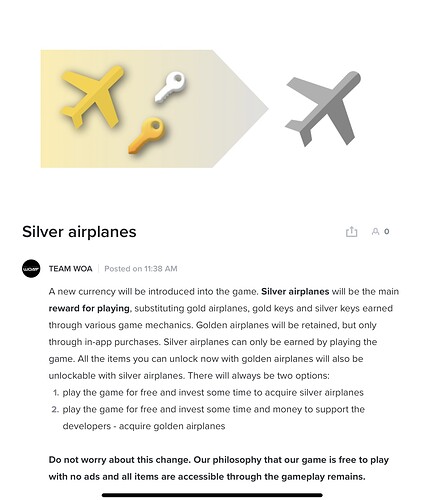 Reading between the lines and this is the first I am seeing of this like everyone else.

I think this is a way of cleaning up the various systems of keys and airplanes, which is a good thing and is also as a result of them adding the contracts item too.
My perception is that everything Gold Plane related will remain the same, but almost certainly silver planes are likely to be a higher amount needed. This is similar to many other games. Pay money get stuff faster. So for example and this is hypothetical. An A380 may cost 28 Gold Planes to unlock, but could be 40 Silver. Or they may leave it the same due to the time taken to earn so many Silver Planes.

I like the simplicity of it. So I am curious how they are going to manage it, but as I said, given the contracts piece and the reputation piece it looks like it’s coming with it. A necessary change

One thing I will say. Is testing is going to take a while on all of this, when it’s ready… so update may take longer to arrive

It also sounds like you will no longer receive gold planes for aircraft after maintenance C, they will be purchase for cash only. Although I’m hoping it will be better than the current system the cynic in me thinks it will be a bigger grind fest than it already is. I’d suggest anyone with aircraft in maintenance C sell them fairly soon.

no longer receive gold planes for aircraft after maintenance C

I’d assume it would be silver planes after maintenance C.

I agree, I also agree with @carlsberg72 point that it will be a higher cost for opening anything (aircraft for example) than it costs in gold planes. Probably a lot higher.

My overall main concern with the change is if my current gold plane balance will remain as gold planes, or if they will become silver planes, but I do note the line: Play the game for free and invest some time and money to support the developers - acquire golden airplanes

Will this mean we can still get some gold planes for free, such as the final level of a season?

As I read it, in the future you only get golden planes with a real money purchase.

And your current gold plane balance shouldn’t change. You have either purchased or already earnt that. The changes will likely be go forward ones rather than retroactive

I can imagine the uproar when the current earned or purchased GP’s “devalue”.

It will likely be an either/or set up. That’s how it’s done normally I think. Therefore @SomeGuy98345 is likely correct in his assumption

Won’t know for certain until the testing phase.

Providing there’s an option to convert gold planes into silver planes then I shouldn’t see an issue in unlock prices increasing slightly.

Sorry meant to say sell airplanes in maintenance D soon, that’s when you get the gold planes.

I wonder If there will be a silver HaugLand visiting the airport instead of the gold one.

It’s not designed to be fair. It’s designed to tip you into buying gold planes as that’s what helps the devs fund the ongoing development to the game.
Every “free to play” game is like this. Those that pay, progress faster. You can play for free and I have done on many games over time, it just takes you way longer to get there. But fair it is not. I’m ok with it, but that’s just me.

“Longer” is what call’s fair. If to get something in free to play take toooooooo long, or a loooooooot of money, that make people to loose interesting in game. I play a lot of games “free to play”, all of them better to call “pay to win”, VIP, daily cases, spend more money to get more bonuses, to get something small you need to spend, like normal full price game for PC/Consoles. Most of needed part of game paywall.
For example, now I need like 32+ day’s to get 2 GP for 1 plane. If to get same amount in silver planes will take me like 1 year, that don’t make me feel like fair play, it just increasing wall, on which I need to climb to get something, and make me to loose interesting in game.
In Most of such “Free to play” I spend like 5-10 minutes, after this they go to deleted and forgotten like donating trash with 0 star’s and negative recommendation.

I don’t really understand what I’m missing here and what all the fuss is about.

Clearly, any pre purchased GPs will remain in your game.

For me, I’m so deep in the game that ‘earning’ free GPs is a distant joy. It’s clear, in my position, that I’d need to purchase GPs to say unlock the 747. And frankly, I don’t care, it’s not as if it’s crazily expensive IF you choose to do so.

If you don’t want to purchase them, the game is so detailed, rich in graphics, immersive gameplay, variable at airport views, arrivals board and AD FREE progression, what’s the problem?

I think it’s only fair that the DEVs get rewarded for all their hard work.

The over riding thing is the game is AD FREE and you can play at your own rate.