Will be the earnings for flight ever adjusted?

I don’t think that this new income system on long haul was intended to generate more money for Haugland. There could have been many other ways to generate money. E.g. higher prices to unlock new aircraft types, higher prices to unlock new airports. There are so many options and if there is demand to generate money this community will be happy to help I guess. Here’s one idea for example: Let’s start with a basic system to unlock new aircraft types for own fleets. You can unlock one S-type (e.g. ATR72), one M-type (e.g. A320), one L-type (e.g. 787) and one XL-type (e.g. 747). For all other aircraft you have to invest real money e.g. 2€, this is a decent amount that many people can afford. But the big question is, if it’s all about the money or if devs just want to turn the game into a certain direction?

What I’m really missing right now is a bit of realism when it comes to routes that can be flown and to income on certain routes.

Also this new system is killing interaction between players since you’re punished for having connections with other players especially when you’re using widebodies. In my opinion you should get a bonus for handling your connection partners aircraft instead of losing money on those routes

I don’t think the devs are interested in anything we say on here. Although happy to receive praise & want a high score on the Google play store etc any constructive criticism is just criticism & we’re all just a bunch of moaning so & so’s. A loyal fan base doesn’t fit into what they want & if we don’t like the way the game is going then just leave, that’s my guess into what they’re thinking

I don’t want a grind but ads? nah, it’s probably one of the worst things in the history of mobile games besides micro-transactions (to some extent). Ads just get way too persistent especially this type of game. Micro transactions get way too up in your face once again especially for this grindy of a game and well the only problem is I’m worried that by putting the ads they just might run this game straight in to the ground and knowing people and the STuPiD reviews people leave that’s pretty certainly a factor.

Alright well to me, it seems like you have endless hours in your life to grind. I, and many people alike, don’t. Go ahead, go support devs that only want their money stream to come from purchases. But for me, I am never buying a micro transaction. Let alone from this game.

I’m just saying that ads can get way too persistent and is one of the greatest ways to run your entire game into the ground because yeah ads are just right in your face most of the time.

I agree, one of the refreshing things about this game is the lack of ads. And without that revenue stream how else do people think this game will survive. There’s no doubt you can play this game for free, but free sends a game to the graveyard super fast.

The devs are airline enthusiasts and way more invested in this game than some might think. It is true they don’t spend a lot of time on the forum, but they do listen and that’s better than many.

I feel this change is part of a bigger long term plan about running airports as hubs. Do I agree with it, not really. It doesn’t make sense, but for now I adapt and move on

Yeah adapt this situation and move on…

I never said you had to watch them. It just has to be a side thing, maybe in the shop where you can watch ads for GP’s. Obviously not pop-up ads. Those are cancer.

Though to be honest I’m just looking at the evidence. Just how drastic this change for plane revenue stuff just makes me think (from previous experiences) that the devs are really pushing for money. I don’t have a problem with that but I feel like it would be a bit greedy to have ads of any kind that are of importance. and about the whole " it seems like you have endless hours in your life to grind". I get it, it was just your thought but no. Mobile just yeah, I don’t even know how to say it. To add to the whole fact adding ads (no matter what type) would just be annoying, frustrating and more than often infuriating. Technically speaking the devs have enough money to give us (somewhat) monthly updates so people who don’t use logic and stuff would think that they are greedy for more money (not saying they are though). The community just isn’t something you want to deal wit, especially the more American market, those people will just blindly hate stuff. For instance FIFA Mobile, No Pop-up adds, no forced ads, NOT pay2win and people from the more American regions just yeah. Though not everyone is like that. Already there are people talking about this game being pay2play Even though those are the people who don’t know how to play the game or find it boring and maybe a tad bit slow progression wise. Everything I just wrote is stupid and feels like a “mixed” steam reviews section. To summarize: People can be stupid and don’t care about other people cause this is the internet and will hate because WHy nOt, People don’t care what the game it is no matter how enjoyable. They’ll blame their own mistakes on the devs because once again the internet. Not everyone is stupid and yes micro transactions are horrible for this type of game (where progress resets). and More often than not people hate the grind, even if they have time. Say another example F1 Manager half of the reviews are just “oh grindy” or “oh, I hate it” even though their teams look like those 5 star stuff you only get through micro transactions in a Take-two game. WoA is enjoyable yet Infuriating, already this game hangs on the balance reviews wise and adding ads would most likely ruin the experience because you don’t necessarily want to give the devs the money for the grind but you want to progress. That being the whole story with ads is the only reason why ads are half as bad as micro transactions (And that’s saying something). I just want Haug.Land to probably invest more in the non-aviation department (just for the time-being) to try and get a good money stream to support their other games If they do that they need to make a decently large (endlessly playable) game that have community streams, meaning your games a hit. You get donations from people who like the game just like ATS or ETS2. One again these are just my really stupid opinions because I big dumb but hey!yeah… I just wasted 20 minutes of my life writing this.

I do not agree with boring and annoying advertisements in the middle of the game, but I also found a very big change in relation to earnings, we lost a lot on international flights and as our friend @carlsberg72 said I am adapting to the new format avoiding as much as possible sending planes for too much far getting the best possible revenue on short flights, for those who are starting unfortunately it is very exhausting to play.
I sent an idea to the developers by email to try to raise funds in an easier way and that does not disturb our game with videos.
The idea is to put in the game planes that pull flags like advertising a cessna pulling an advertisement and that gives you 50 $ (virtual money) when you click on it like in PRG with the old airplane, you click on that airplane pulling the advertisement it taxi, take off and fly over the airport with whatever advertising you want, let’s assume that sumu up or coca cola decides to sponsor the game why not put it like that inside the game on billboards in car parks at the gates of the boarding and disembarkation planes .
Anyway you can get sponsorships without having to spend 30 seconds watching videos.

How many letters was this?

I want to die.

Hello!
Tried to make a calculation to avoid flying non-profit-routes.
There may be some tiny mistakes in this table:

How to use this table: 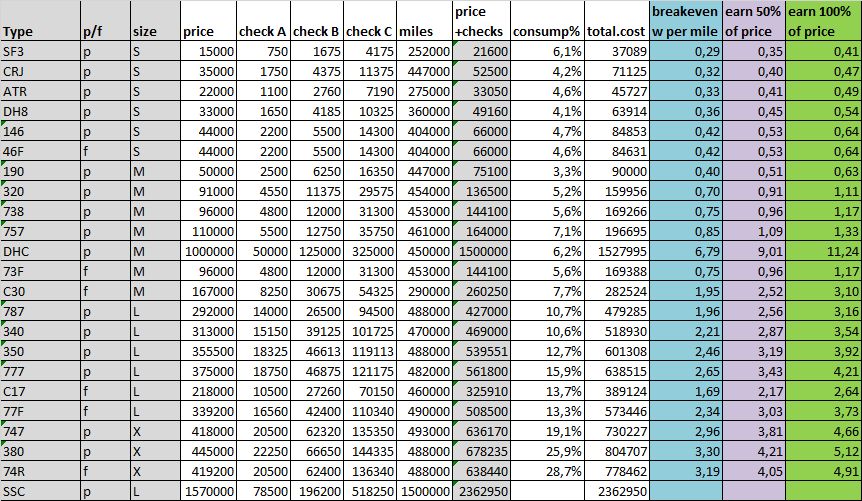 This is great! Thank you for the work and effort.

Like most of the people on here, we believe that shorter routes are more profitable. Is this your agreement as well?

Also, which aircraft in each size is the most profitable?