As users are having questions about user interface and various functions in WoA - below you will find an evolving post that will grow contentwise with the explanation of actions you can find in the game.

First and foremost - what you have to do is to handle planes - handle them on time and earn money for the same. You can also develop airport with new facilities and equipment and finally build own fleet once you are rich enough.

World of Airports – user interface in a nutshell

Most of the main menu features are self-explanatory and no one should have a problem with those except one tip for hangar right below.

Hangar accessed from main menu – it’s important to notice that “unlocking” airplane model is only first step of plane purchase process – then actually plane must be purchased and price for the plane is right there on the screen:

You can unlock the plane model in hangar only. Planes are to be purchased while playing at the airport (explained below).

Airport reset feature - for every airport player may “wipe” his progress immediately if one thinks some dramatic mistakes happened in the process and its better to start from scratch - to do so - in airport selection panel there is reset icon - it will reset stands/facilities ; 10.000 starting money will be there if any airplanes were unlocked already - that will be retained but gold planes owned at the moment will not come back after reset so bear that in mind and use it wisely.

On series of screenshots with markers, some basic user interface features are explained. 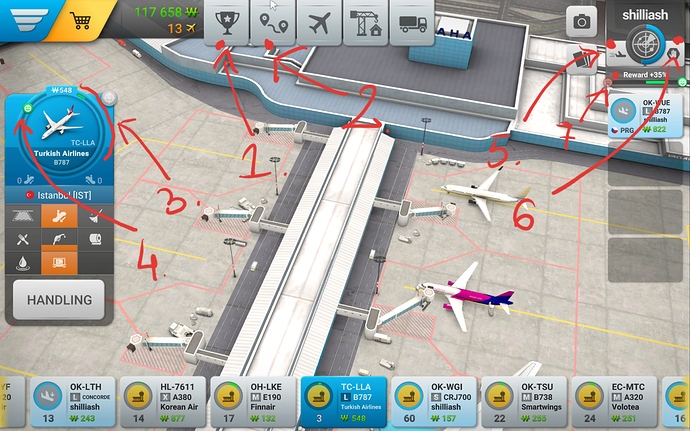 2. Connection section - details about estabilished connection with other players.

4. 90% of timer marker – when a plane is handled before 90% of time passes – it will increase handling bonus (bonus value beneath radar icon).

Between 90-100% - bonus handling income is not anymore applicable but the plane handled on time still will increase bonus value.

5. Arrival planes holding “speed up” feature – it simply enables faster arrival of planes that are on holding to land. (after its beeing used its on cooldown for equal amount of time).

6. Arrival planes holding “freeze” feature – it simply stops arrival timer/process for max 3 minutes (after its beeing used its on cooldown for equal amount of time).The player can temporarily disable the timer of planes on holding. This feature also has a cooldown so it can not be overused. When holding is frozen income reward is decreased to 0% = for successful handling players will receive regular income only.

7. Handling bonus “value” – dependent on successful handling planes number. Planes that are not handled on time will depart airports with reduced basic value for handling and will decrease bonus value every time a player fails to complete handling on time.

Extra: Holding “slot” purchase option – player can decide and control the number of planes on holding for land. The maximum number of holding slots is 4 – in the beginning for any airport default is 1 – once purchased can not be locked back again. Be careful in the early stage of any airport with purchase of holding slots - excessive number will lead to problems with planes, not land and increase negative bonus. 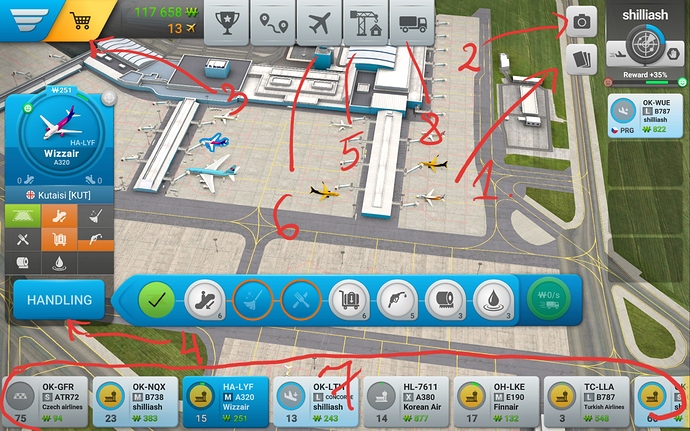 1. Hide cards of planes that are not under handling at the very moment. Helps to have better overview of status when many stands are occupied.

2. Camera option (currently 2 options) - free camera that can be placed anywhere on the screen as per user needs and will stay there. And default one that “follows” plane of choice on card click.

3. In-game market – place where players can sell gold planes for 10k in-game currency each and add different amounts of gold planes can be purchased (via Google and Apple stores) for real currency. It definitely will boost up speed of development for new features as the game is by principle free of charge but time invested in game development is quite valuable in fact.

5. Airports facilities purchase happens here – additional stands / AH – advanced handling building that enables the possibility of building M/L/XL stands or new terminals of extensions of terminals. All of those are necessary to increase the capacity of the airport(s).

6. Players fleet management panel – where user can unlock and purchase airplanes (that can be done as well on main menu in hangar

7. Plane cards – planes that are currently at the airport – taxing in / under handling / taxing for departure. Yellow indicator is a guide that at least 1 handling step is available for the same plane.

If a player already unlocked the airplane model in hangar plane purchase can happen via Fleetlist in-game (plane icon on top of the screen).

Purchased planes are based at the airports meaning plane belongs to the airport it was purchased on.

It can not be re-based but can be sold for gold planes with value loss compared to the price for a new machine (it is 2nd hand plane then so its value is naturally cheaper). 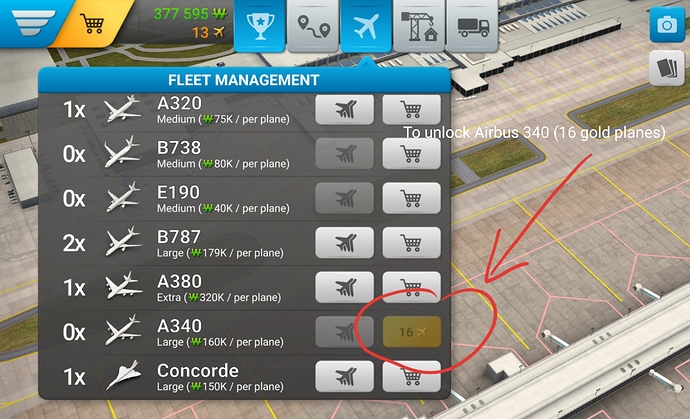 Upon purchase plane is based (assigned) on airport of purchase; registration of newly purchased airplanes is assigned by server and can not be changed by a player

In fleet list plane status is visible if the plane is at any airport / on route. Aircraft can be sold it will still complete current rotation (route) - [sell them by using green marked icons with gold planes] 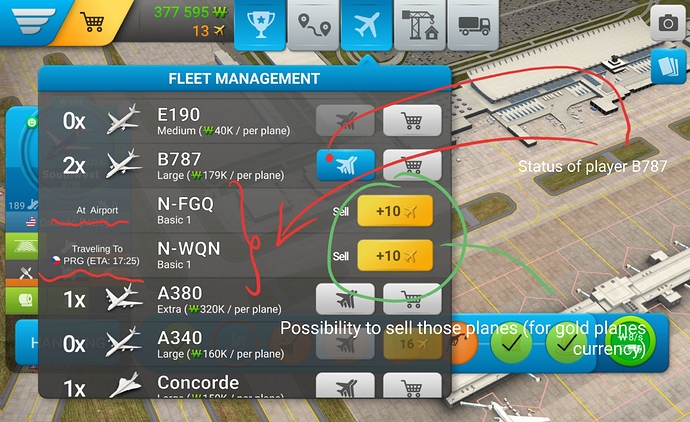 Player-owned planes not only provide bigger handling income but the owner receives route income for tickets. Few destinations are available additional ones can be unlocked/purchased.

Currently, one player livery is available but works are in progress on different player liveries.

BENEFITS THAT COMES WITH OWN FLEET HANDLING

IF YOU EXPERIENCE QUES ON ARRIVAL AND/OR DEPARTURE IMPORTANT

Quite possibly reason for ques on arrival and planes comming with half or more timer already used is that players just accept arrivals immediately (even if there is que on departures and couple of planes on arrival as well).

Timer starts at the very moment of “cleared to land”. Please consider that while playing.

Also there are two timers - one to the right on planes in holding cards (1-2-3 or 4) is a limit to land a plane (if failed it goes creating negative modificator to bonus).

Second timer - lets call it “handling timer” starts when stand is choosen and confirmed. That is 100% reason why some planes come with time used dramaticaly already.

Above mechanics is purposely introduced to prevent “idle clicking” playstyle which is quite common in majority of mobile games nowadays.

Also on event of traffic - its probably worthwile to use “stop arrivals” button to the right of radar - it will help reduce arrivals temporarily so ques will not escalate for certain amount of time.

How does CONNECTIONS work:

You can establish connection with friend / or complete stranger:

Example when user press random connection from BRI to INN

When your connection-mate plane arrives you will receive in-app push notification (if you have them ON in your mobile device):

When opening BRI eventually connection-mate plane will arrive and upon handling it will “Count as 1” on connection counter.

It is reflected in achievements as well:

That is it. Simple right ?

Thanks for posting this, I was confused

Awesome man, thanks for all the help. Some great pieces of info, luckily for me I can finally start playing since its out on IOS now

In regards to the free unlock, does this mean that EVERYTHING is free to use to move even more flights?

While handling many airplanes, double tapping the screen will hide all airplane tabs that don’t require anything (landing or leaving). Double tapping again will show all tabs again.

This is my favourite feature. If you wonder why, you will understand when you have a full Prague to handle

Great tutorial! Some really cool info for everyone to use. Would you want to make it a Wiki so that anyone can add their tips and tricks to it?

This official tutorial will have a link in game in next update that is under developement - so first post will be edited and more things will be added step by step.

It describes game mechanics (real) - wiki is probably good idea but I have no time to take care about woa-wiki. I hope above tutorial will be still helpful to beginners.

Thank you for the info

A very good tutorial with all the information needed for the game! Been playing the game for the last couple of days. I love it.

This game is amazing. Been playing for over a week and can’t wait for the future. One area of complaint I have is the planes getting stuck on the taxi way and clogging the flow of the game. Easily correctable but a nuisance. Having a great time with this.

Clogging is purely because of playstyle (take it easy on arrivals and use “freeze arrivals” from time to time).

Glad you like the game, we are still working on it

I know this is a new game/simulation and there’s going to be bugs and issues that will be corrected as time goes on. That being said it’s difficult to have a nice flow going at Prague only to have it come to a crashing halt due to a plane that stops moving for no reason. Going to the main menu and back to fix it is a nuisance. It seems everyone is having this issue. One way might be to try altering where you put planes so as to not create the issue where planes will just stop. Aside from the taxi issue I’m really enjoying this game. Such a cool simulation.

A post was split to a new topic: Change of nickname

Can you explain a little more about the ‘Gold plane’ concept and the visit from Haug concept. Am not very clear on the rewards structure. What does the symbol of the man mean?

I exchanged a gold plane for 10000 money? Is there any other uses for gold planes?

The “Gold plane” is the reward for handling x amounts of airplanes at a given airport. How much you need to handle depends on how many times you have got a golden plane unlocked for that airport previously. The first time you need to have handled 100 points (small airplanes gives 1, medium 2, large 3 and extra large 4 points), the second time for an airport is 200 and so forth. Every airport has it’s on count, so it can be worth taking the first few on all airports. Once you have unlocked a golden plane, you press Achievements and Claim. Then a special golden plane will come to your landing queue. When you take it down, you get one gold, when it successfully takes off, you get another gold = two in total. It also yields more currency then a normal plane would.

Gold can be used to unlock airplanes you can own yourself, or for currency used to upgrade airports and buy your own unlocked airplanes (they give a lot more currency in return then normal planes).

My advice is to have at least 2-3 gold for when jumping to a new airport, and then exchange those to help speed up the initial slow process.

Edit to clearify: Gold follows you from airport to airport. Currency is stuck with the airport it was earned.

please edit guide as game is changing… thanks a lot

A post was merged into an existing topic: Haug.land green b737 will now arrive with different logic